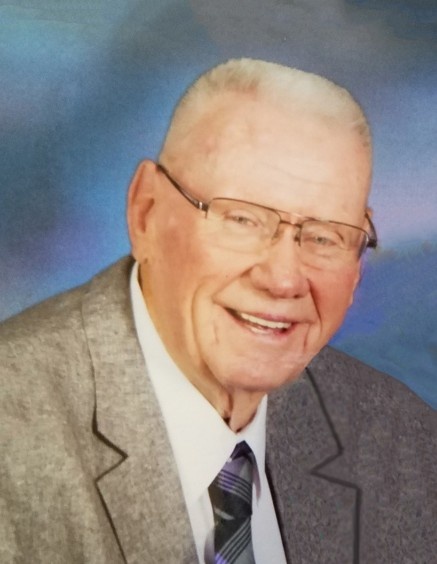 Kenneth K. Skoog, 90, of Fargo, ND, formerly of Wahpeton, ND, passed away on Friday, April 24, 2020, at Eventide in Fargo due to the COVID-19 virus. A visitation will be held on Friday, July 24, 2020, from Noon to 1:00 pm, followed by his memorial service at Vertin-Munson Funeral Home in Wahpeton. A live stream of the service will be available on our website. Pastor Erika Buller will officiate the service. Burial will be at a later date. Arrangements have been entrusted to Vertin-Munson Funeral Home in Wahpeton.

Kenneth Karl Skoog was born October 7, 1929, to Carl and Lydia (Blumer) Skoog in Fargo, ND.  His mother passed away when he was an infant and he was raised by his loving stepmom, Esther Skoog.  He graduated from high school in Christine, ND.  Kenneth enlisted in the Airforce October 7, 1947 and served in the Korean War and the Berlin Airlift.  He was honorably discharged September 28, 1950.  Kenneth and his wife Erlys enjoyed traveling and attending the annual Berlin Airlift reunions.

In 1951, he began working for the Great Northern Railroad which later merged with the Burlington Northern Railroad.  He retired in 1993, after 43 years of service.  Kenneth married Erlys V. Ordahl on April 21, 1954, at Breckenridge Lutheran Church in Breckenridge, MN.  Kenneth enjoyed time at the lakes with family and friends, hunting, flying, woodworking, participating in and watching sports, and having beers or drinks with friends.  In Wahpeton, he was a member of the American Legion VFW, Buffalo Club, Railroad Retirees Breakfast Club, Bethel Lutheran Church and for 26 years was the legislative representative and Local Chairman for the United Transportation Union.  Kenneth was not shy to state how proud he was of his wife and children.

Kenneth was preceded in death by his parents, Carl and Lydia Skoog; his loving mom, Esther Skoog; and his sisters, Ruth Olson, Elsie Edenstrom, and Elvina Edenstrom

To order memorial trees or send flowers to the family in memory of Kenneth Skoog, please visit our flower store.