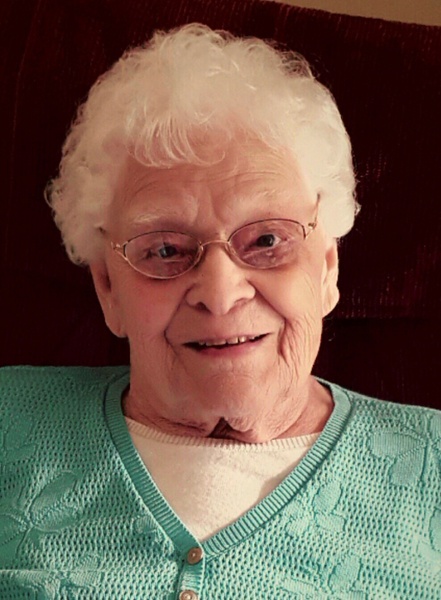 Agatha Mitzel, 99, of Wahpeton, ND passed away on Wednesday, November 22, 2017 at CHI St. Francis Nursing Home.  Visitation will be held from 11:00 am to 1:00 pm, followed by the funeral service at 1:00 pm at Emmanuel Lutheran Church, Abercrombie, ND on Wednesday, November 29, 2017.  Rev. Dan Forsberg will officiate.  Burial will be at Fairview Memorial Gardens, Wahpeton.  Arrangements have been entrusted to Vertin-Munson Funeral Home, Wahpeton.

Agatha Snider was born on December 26, 1917 to Jim and Marie Snider at her home in Walcott, ND.  She attended school in the Walcott area.  Agatha (Gathy) married Marvin Mitzel on October 10, 1942.  They farmed near Dwight, ND on Marvin’s parent’s farm.  They later moved near Abercrombie, ND where they continued to farm.

After Marvin retired, the couple moved into Wahpeton.  Marvin passed away in December of 2001.  A few years later, Agatha moved into the Leach Home in Wahpeton where she resided until the time of her passing.  Agatha passed away on November 22, 2017, just before her 100th birthday.

Agatha was a member of Emmanuel Lutheran Church in Abercrombie where she was very involved with the ladies aid.  She loved to bake, but baking pies and doughnuts were her specialty.  Agatha enjoyed time spent with family and friends when they would stop over for coffee and conversation.  Agatha’s granddaughters were her pride and joy. Agatha's Memorial Folder
To order memorial trees or send flowers to the family in memory of Agatha Mitzel, please visit our flower store.