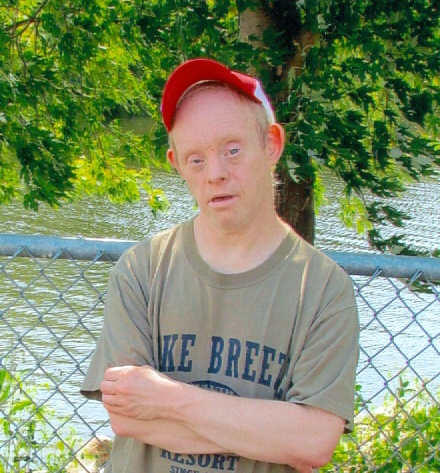 Alan Noss, 56, of Wahpeton, ND passed away on Saturday, July 22, 2017 at Essentia Health in Fargo, ND with family by his side. Visitation will be on Tuesday, July 25, 2017 from 5-7 PM, with a 7 PM prayer service at Vertin-Munson Funeral Home, Wahpeton. Visitation will continue on Wednesday, July 26, 2017 from 9-10 AM, followed by the funeral service at 10 AM at Evergreen United Methodist Church, Wahpeton, with Rev. Jen Tyler officiating. Burial will be at St. John’s Cemetery, Hatton, ND. Arrangements are entrusted to Vertin-Munson Funeral Home, Wahpeton.

Alan Elroy Noss was born March 23, 1961 to Maurice and Tolvine (Land) Noss at Northwood, ND hospital. Alan grew up on a farm near Hatton, ND and attended special education classes in Grand forks, ND for a few years. He was the youngest of four children, and learned to do many tasks at home. Bike riding, working jigsaw puzzles, listening to music and playing with his brother and sisters were some of the activities he enjoyed. He lived at home with his parents for many years. In 1997 he moved to a group home in Wahpeton, ND where he has since resided. While living there he was under the care of Red River Human Services for many years, doing a paper route, sorting and shredding paper were some of his favorite jobs. He enjoyed outings into the community and always wanted to be active. His sense of humor and joking will be remembered by many. He attended Evergreen United Methodist Church and had his special friends there.

He was preceded in death by his parents Tolvine and Maurice Noss, Grandparents Bernhard and Carda Land, Selmer and Hannah Noss, several aunts, uncles and cousins.

Wahpeton, ND
Wednesday, July 26, 2017
10:00 AM
To order memorial trees or send flowers to the family in memory of Alan Noss, please visit our flower store.