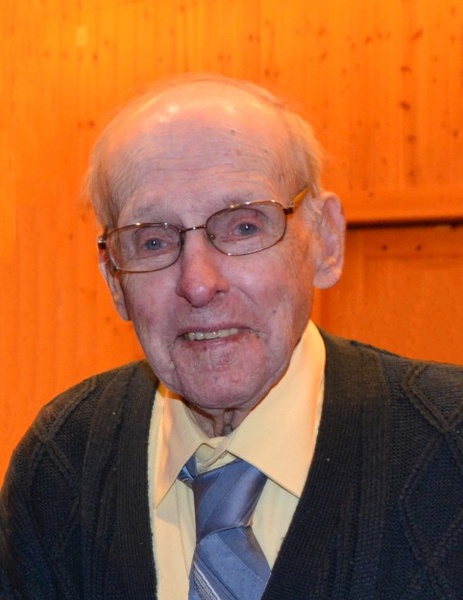 Armour R. Thompson died peacefully at Villa Maria Nursing Home in Fargo, ND on July 31, 2019 at the age of 95. His funeral will be Saturday, August 3 at 1:00 pm with visitation 1 hour prior to the service at Viking Lutheran Church, rural Walcott, ND with Rev. Wayne Quibell officiating. Interment will be at Viking Lutheran Cemetery.  Arrangements have been entrusted to Vertin-Munson Funeral Home.

Armour was born September 24, 1923 in Wyndmere, ND, to George and Hilda (Braaten) Thompson. He graduated from Viking School #1 and farmed and ranched with his father and later, his brother, LeRoy. Armour proudly lived in Viking Township in the same house until September 2018 when he moved to the Leach Home in Wahpeton, ND.

Armour was a humble man with an uncanny sense of humor who immensely enjoyed visiting with people of all ages. He was gentle with his cattle, dogs and cats. Saturday morning coffee visits with relatives, friends, and neighbors became a tradition in Armour’s kitchen. He was influential in the lives of his nieces and nephews.

Armour was baptized and confirmed at Viking Lutheran and was a life-long member.

Armour is survived by his sister, Joyce Braaten, sister-in-law, Marie Thompson, 11 nephews and nieces as well as grand and great-grand nieces and nephews, including a great-grandnephew named Armour. He was preceded in death by his parents, his brothers, Howard and LeRoy, sisters, Arlene Bishop and Marlys Almer, and a niece and nephew.

The family would like to thank the Leach Home for their loving care and helping Armour feel that he had a new home.

Memorials may be made to the Viking Lutheran Cemetery Fund or the Leach Home. To order memorial trees or send flowers to the family in memory of Armour Thompson, please visit our flower store.