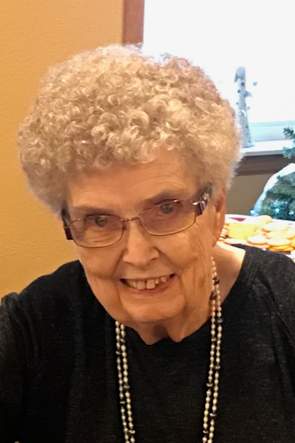 Audrey Hill, age 83, of Norwood Young America, MN, passed away on Friday, February 28, 2020, at Knute Nelson Care Center, Alexandria. The funeral service will be at 2:00 p.m. on Saturday, March 7, 2020, at Vertin-Munson Funeral Home chapel, Wahpeton, ND, with a visitation one hour prior to the service. Pastor Dean Bjorlin will be officiating. Burial will take place at Fairview Memorial Gardens at a later date. Arrangements have been entrusted to Vertin-Munson Funeral Home in Wahpeton.

Audrey Mae Berg was born on May 30, 1936, to Harold and Florence (Knutson) Berg in Lidgerwood, ND. She grew up and attended school in Lidgerwood, graduating from high school in 1953. Following her education, she was united in marriage to Rodney Hill. The couple farmed near Veblen, SD, where they raised their 6 children. The family moved to Wahpeton, ND in 1978. In 1986, Audrey moved to San Bernardino, CA, to spend time with her sisters.  A few years later, she moved to Bloomington, MN to be closer to her children and grandchildren. After living in the Minneapolis/St. Paul area for a while, she moved to the Wahpeton/Breckenridge area.

Audrey enjoyed reading; playing cards and bingo; doing puzzles, and was very fond of angels. She loved Christmas; her family would joke that she was worse than the kids about wanting to open presents. She cherished spending time with her children and grandchildren.