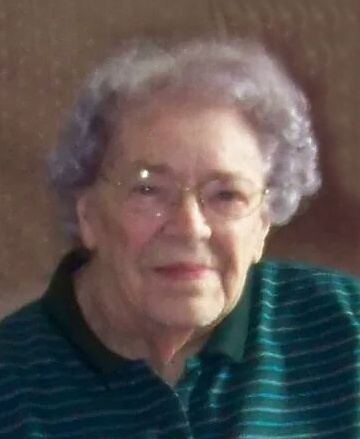 Cecelia Joy Larson, 94, of Battle Lake, MN, formerly of Abercrombie, ND passed away on Saturday, August 19, 2017 at the Good Samaritan Society, Battle Lake. Visitation will be held from 5:00 pm to 7:00 pm on Tuesday, August 22, 2017 at Vertin-Munson Funeral Home, Wahpeton, ND. Visitation will continue from 10:00 am to 11:00 am, followed by her funeral service at 11:00 am on Wednesday, August 23 at Emmanuel Lutheran Church, Abercrombie, with Rev. Michael Buller officiating. Burial will be in the church cemetery. Arrangements are entrusted to Vertin-Munson Funeral Home, Wahpeton.

Cecelia Joy Hanson was born on February 26, 1923 to Albin and Minnie (Benson) Hanson near Clitherall, MN. She attended District 53 country school near Clitherall and graduated from Battle Lake High School in 1941. She was a member of the Nidaros 4-H Club during her childhood years.

From 1941 to 1942 she attended Dakota Business College in Fargo, ND and obtained a legal secretary degree. She worked for James M. Witherow, Moorhead, MN, Attorney-at-Law.

On January 14, 1945, Cecelia married Hjalmer O. Larson at the Trinity Lutheran Parsonage in Moorhead. The couple lived on the family farm for 56 years. After they retired in 1976, they spent a month in Europe. They also spent time visiting their relatives in Norway and Sweden, with whom they had always maintained family ties. Hjalmer passed away on June 9, 2001.

In October of 2001, Cecelia moved to the Aber Castles in Abercrombie. In December of 2012, she moved to the Good Samaritan Society Nursing Home in Battle Lake, MN, where she continued to live until the time of her death.

Cecelia enjoyed spending time with her family and friends. She had a passion for doing her photo/scrapbook albums, embroidering dish towels, baking cookies, keeping a journal, and writing letters. She was a member of Emmanuel Lutheran Church in Abercrombie where she was actively involved in the ALCW as president, was a treasurer for 13 years, and a Sunday School teacher for 10 years. Cecelia was also a 4-H Club leader for over 20 years, a charter member of the Valley Homemakers for 49 years, and president and secretary fo the Abercrombie Senior Citizens.

She was preceded in death by her husband, Hjalmer; her parents, Albin and Minnie; an infant son, Richard; one granddaughter, Elise Larson; one grandson, Karl Kludt; a brother, Bill Hanson; a sister, Corinne Kvebak; and a son-in-law, Kevin Stoltenberg. Abercrombie, ND
Wednesday, August 23, 2017
11:00 AM
To order memorial trees or send flowers to the family in memory of Cecelia Larson, please visit our flower store.