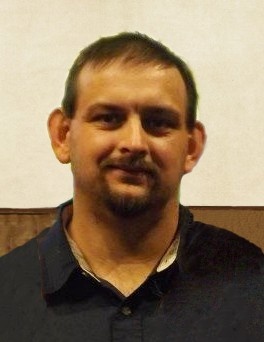 Christopher L. Olsen, 44, Wahpeton, ND, left this world to be with his mom and dad in heaven on Wednesday, August 7, 2019.  Visitation will be on Monday, August 12, 2019 from 5:00 pm to 7:00 pm followed by a prayer service at 7:00 pm at Vertin-Munson Funeral Home in Wahpeton. Pastor Erika Buller will officiate the service.  Arrangements have been entrusted to Vertin-Munson Funeral Home.

Christopher Lyle Olsen was born on August 9, 1974 to Terry and Donna (Jahner) Olsen in Breckenridge, MN.  He grew up near Fairmount and later graduated from Fairmount High School in 1993.  Eventually, Chris moved to Wahpeton where he worked for area farmers, Wil-Rich, Emco, Minn-dak yeast plant, and a short while with his brother, Eric, at Pro Sweep in Fargo, until recent health issues prevented him to continue.

Even though his LVAD prevented him from doing many things that he enjoyed, Chris wouldn’t let it stop him from fixing anything that had to do with engines, from lawn mowers to tractors, he could fix it all. He loved finding treasures at auction sales, garage sales, or during what he declared a holiday, “Spring clean-up”. He enjoyed helping his sister, Emily, build furniture, even though he would always say he wasn’t a carpenter. He always made sure to take his dog, Marly, for a car ride every morning. He also loved spending time in Bottineau with his nephews, Brady and Justin and helping Mariah with all of her animals. Chris was the type of person who would give you the shirt off his back; he was always willing to help anyone. He loved making everyone around him laugh. He loved spending time with his nieces, nephews, and his friend’s children, who all lovingly referred to him as “Uncle Chris.”  He will be remembered most of all for his sense of humor and funny personality.

He is survived by his siblings, Tami (Robert) Peck and her family, Mariah, Brady, his girlfriend, Briar, and their dogs, Gus and Walter, Justin, his girlfriend, Rachel, and their children, Braxton and Hayden; Eric Olsen; and Emily Cizek and her children, Logan, Reese, Brennen, and Miley, along with their dogs, Nova and Cali; his godson, Wyatt Nelson; his loving dog, Marly; along with many aunts, uncles, cousins, friends, neighbors, and all who called him uncle Chris.

He was preceded in death by his parents, Terry and Donna; and his maternal and paternal grandparents. Christopher's Memorial Folder
To order memorial trees or send flowers to the family in memory of Christopher Olsen, please visit our flower store.