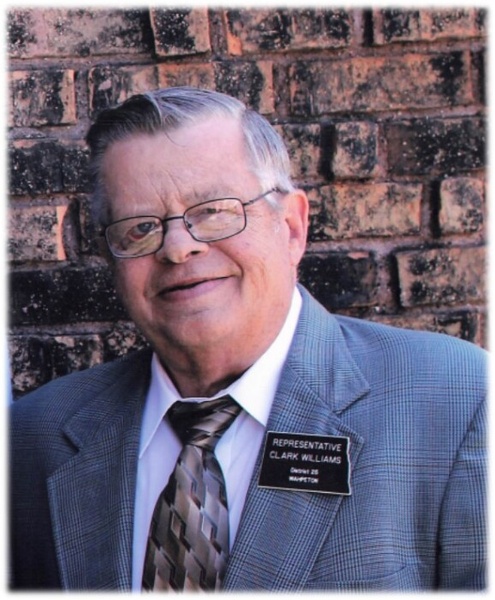 Clark Williams, 78, of Wahpeton, ND, passed away on Monday, November 16, 2020 at CHI St. Francis Hospital in Breckenridge, MN.  Due to the current conditions that our country faces as well as the safety of others, a private family service will be held on Friday, November 20, 2020 at 11:00 AM at Bethel Lutheran Church in Wahpeton.  Burial will take place at Fairview Memorial Gardens, Wahpeton.  A live stream of Clark’s service will be available on the funeral home’s website.  Arrangements are entrusted to Vertin-Munson Funeral Home.

Clark Dennis Williams was born the eldest child of Clifford and Adella (Saude) Williams on July 12, 1942 in Wahpeton, ND.  He grew up in Lidgerwood, ND, where he attended Lidgerwood High School, graduating with the class of 1960.  He then attended Valley City State University where he earned a double major in English and Social Studies, and later graduated with his Master’s Degree from NDSU in May of 1969.

On June 1, 1968, Clark was united in marriage to Gail Gutzmer and they were blessed with their children, Corey and Carrie.  Clark taught at a number of places including: Turtle Lake High School in Turtle Lake, ND, Sargent Central High School in Forman, ND, and Wahpeton Senior High School where he later became principal.  He was selected as an Outstanding Secondary Educator of America in 1974, received the Outstanding Young Educator Award from the Wahpeton Jaycees in 1975, and received an Associate Honorary Degree from the North Dakota State College of Science on graduation day on May 15, 2015.

Clark was elected to the North Dakota House of Representatives from the 25th District in 1983, 1984, 1986, 2002, 2006, and 2010, where he served on the Appropriations Committee, serving a total of 18 years.  At the conclusion of the 2013 legislative session, he was honored as the Legislator of the Year by the Department of Career and Technical Educators.

Clark’s biggest joy and blessing was being married to his wife for 52 years, raising his family, and spending time with all his grandchildren.  He was a simple man who needed very little to be happy.  By living his life this way, he thought he was the richest man in the whole world.  Clark was a man known to be fair and compassionate who loved to work hard while making a large impact on many.  The sound of his cowboy boots echoing the high school hallways, his quick wit, and being a forever arm wrestling champion will always be remembered by his past students at Wahpeton High School.  No competitor ever stood the strength of Clark’s arm!

Clark’s family was his most prized possession.  He loved sharing the lake with his entire family.  He was always excited to fish with his grand kids, ride on his infamous riding lawn mower, sing the Battle of New Orleans, or sing any other silly song for that matter.  He was a spectacle and demanded attention when he would take a jump off the dock.  Clark was the only person that his family knew of that loved wearing polyester pants and short sleeve dress shirts no matter what the temperature was or what project he was working on at the lake.  He loved to play cards and would so arrogantly win and then would ask, “Who wants to play again?”  Clark was known for leaving crazy and fun messages on everyone’s phones; this will prove to be a wonderful memory for his family to cherish forever.

Clark loved to spoil his grandchildren with dollar bills, peppermint patties, McDonalds trips, and ice cream.  He lived off his dietary stables of Coke, malts, and steak.  You could always find him searching the grocery store for the off-sale steaks, and he enjoyed cooking steaks when his family would come visit telling them, “We are living high on the hog!”  His grandchildren were not the only ones who felt special.  He always included the family dogs by sneaking them a piece of steak whenever he could as well.

He loved his past times of watching westerns, wheel of fortune, and working on crossword puzzles.  He had a knack for writing meaningful poetry and enjoyed correcting written papers for his family.  There were many times the white paper with black lettering was filled with beautiful red marks.  Singing Johnny Cash, Conway Twitty, and other old country songs in his truck will be lovingly remembered by his family.

Most importantly, Clark made everyone he met feel special and loved.  He made a difference in so many people’s lives as he truly and genuinely loved people.

Clark is survived by his wife of 52 years, Gail Williams, Wahpeton; his children, Corey (special friend, Heather), Lisbon, ND, and Carrie (Todd) Oye, Luverne, MN; his grandchildren, Jordan, Donovan and Tessa Williams, Madilyn, Jocilyn and Rozilyn Oye, and Lenny and Nora Swanson; his siblings; and many other nieces, nephews, and family members.

He was preceded in death by his parents, Clifford and Adella Williams; his brother, Brian; and John Wayne.

In lieu of flowers, donations can be made to the Dollars for Scholars Program at Wahpeton High School. Clark's Memorial Folder
To order memorial trees or send flowers to the family in memory of Clark Williams, please visit our flower store.