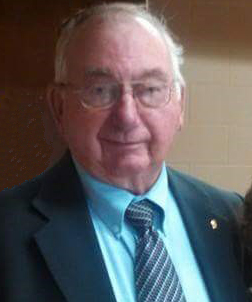 Dale A. Deike, 89, Wahpeton, ND, died peacefully, surrounded by his family on Sunday, July 1, 2018 at Essentia Health, Fargo, ND.  Visitation will be Thursday, July 5, 2018 from 5:00 pm – 7:00 pm with a prayer service at 7:00 pm at Vertin-Munson Funeral Home, Wahpeton.  The funeral service will be at 10:30 am on Friday, July 6, 2018 at Evergreen United Methodist Church in Wahpeton with visitation one hour prior to service. The Rev. Peder Anderson, a long time family friend, will officiate.  Burial will be in Zion United Methodist Cemetery, Great Bend, ND.  Arrangements have been entrusted with Vertin-Munson Funeral Home, Wahpeton, ND.

Dale was born at home in Mooreton township on April 8, 1929 to Herman and Eleanora (Schmadeke) Deike.  He attended grade school at rural Mooreton #3, Wahpeton High School, and Duncan’s National Auction School at Creston, Iowa. He began his auction career, crying auctions with his father at the family-operated Mooreton Livestock Sales Pavilion, and continued auctioning with his dad and was later joined by his son Harlan. He started farming with his father, Herman and brother Lester, continuing the partnership until their father’s death in 1965.  A big part of Dale’s life was raising and milking Holstein cows. He continued to care for, buy, and sell beef cattle until the day he died.

On August 24, 1948 he was united in marriage to Janice Sturgess of Hankinson at Zion EUB church in Great Bend, ND.  He and Janice raised their four children on the family farm. In 1990 Dale and Janice moved to their home in Wahpeton. Dale continued farming with their son Harlan. In 1994 he “retired” but enjoyed active involvement with his beloved farm, making the trip almost daily.

Throughout his lifetime he was a devoted member at Zion EUB church in Great Bend and later at Evergreen United Methodist in Wahpeton, serving on various committees and boards. He was Head Usher at Zion for many years.  Dale was involved with the Jaycees, 4-H leadership, Mooreton Community Club, a founding member of Great Bend Fire Department and District, ND Pottery Collectors Society, Bagg Bonanza Farm and Mooreton Township Board. He was the recipient of an Outstanding Young Farmer Award in 1959, FFA Honorary Chapter Farmer, Meritorious Service to Wilkin County 4-H as an auctioneer, ND Pottery Collectors Society Founder’s Award and several others.

In retirement, Dale and Janice enjoyed camping, spending 15 winters in Arizona, playing cards, shooting pool and riding bike. World problems were solved over coffee each morning with his Burger King coffee buddies.  He collected antiques of all types: Rosemeade Pottery, toy tractors, full size John Deere 2-cylinder tractors and hammers. Lots of hammers!  There was not an antique he didn’t love. Dale spent hours restoring old runner sleds for his children and grandchildren which will be forever treasured. Dale's Memorial Folder
To order memorial trees or send flowers to the family in memory of Dale Deike, please visit our flower store.