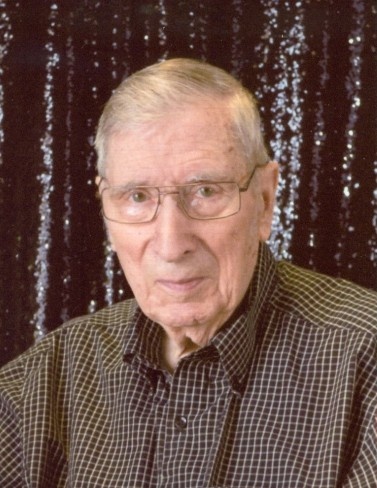 Dale A. Lambrecht, 91, of Wahpeton, ND, passed away on Monday, March 2, 2020 at Siena Court Assisted Living in Wahpeton.  Visitation will be held on Thursday, March 5, 2020 from 9:00 AM to 11:00 AM, followed by his memorial service at 11:00 AM at St. John’s Catholic Church in Wahpeton.  Rev. Dale Lagodinski will officiate the service.  Burial will be held at Fairview Memorial Gardens, Wahpeton.  In lieu of flowers, donations can be made to the Wahpeton American Legion, the American Cancer Society, or a charity of your choice.  Arrangements are entrusted to Vertin-Munson Funeral Home.

Dale Arnold Lambrecht was born on February 27, 1929 in Lisbon, ND, to Arnold and Mabel (Qual) Lambrecht.  He grew up on a farm northeast of Lisbon, and later graduated from Lisbon High School in 1947.  After high school, he began working for the Bell Telephone Company until he enlisted in the U.S. Army in 1951.  Dale was stationed in El Paso, TX, and Pittsburgh, PA before he was honorably discharged in 1953.

After being discharged, Dale returned to Wahpeton where he was united in marriage to Mary Ehlert on November 18, 1961 at St. John’s Catholic Church in Wahpeton.  The couple made their home in Wahpeton where they raised their family.  Dale continued to work at Bell Telephone Company and had over a million miles of accident free driving.  He retired in 1990 after 43 years of dedicated service.

Dale was a charter member of the Elks Club, a member of the American Legion for over 50 years, and served on the Wahpeton Fire Department for 23 years.  He enjoyed hunting, fishing, traveling, camping with his family, and spending time at Rush Lake.

He was preceded in death by his parents, Arnold and Mabel Lambrecht; his sister, Dorothy Dooley; and several sisters-in-law. Dale's Memorial Folder
To order memorial trees or send flowers to the family in memory of Dale Lambrecht, please visit our flower store.