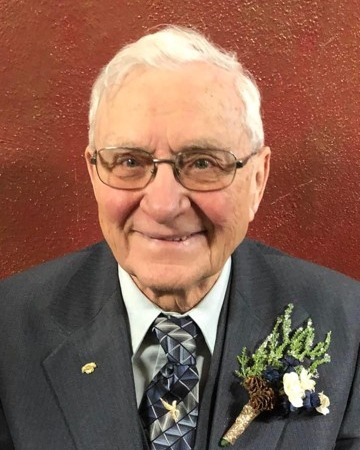 Delmer Arnold Muehler, 94, of Wahpeton, ND, passed away at St Catherine's Living Center on Saturday, December 10, 2022. His Funeral Mass will be held at St. John's Catholic Church in Wahpeton on Monday, December 19, 2022, at 11:00 AM, with visitation one hour prior.  Fr. Paul Kuhn will officiate the service. Burial will be in Calvary Cemetery in Wahpeton.  Arrangements have been entrusted to Vertin-Munson Funeral Home, Wahpeton.

Delmer helped his parents farm until 1951, then entered the armed forces until 1953. He served stateside and then one year in Whittier, Alaska.  After his service, he was employed for Kuch Motors, Milam Motors, Reed Chevrolet, Oldsmobile and Cadillac, and then Smith Motors as a transmission specialist and wrecker driver, until December 1990 when he retired.  He then worked part-time driving school bus for the Wahpeton School District starting in 1991 for 13 years.

Delmer and Bernadine enjoyed their summers camping and fishing at Dead Lake in Minnesota.

For many years he played old-pro softball, enjoyed dancing to polkas and waltzes, and playing cards with family and friends; of which he seemed to always have ‘luck’ on his side.  He also enjoyed putting hundreds of puzzles together, hunting, being an avid MN Twins fan, and was a 2017 participant with the WDAY Veteran Honor Flight of ND.  He was also a member of the VFW and Eagles FOE.

He was preceded in death by his parents; and his 3 brothers, Melvin, Dennis, and John D.

To order memorial trees or send flowers to the family in memory of Delmer Arnold Muehler, please visit our flower store.