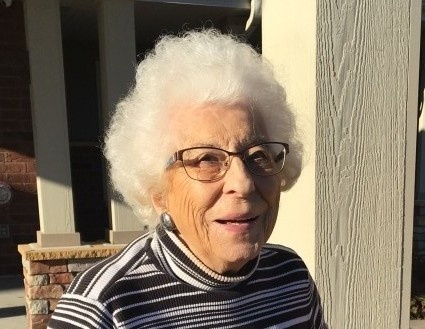 Dolores (Dorie) G. Ness, 88, Maplewood, MN, formerly of Wahpeton, ND, passed away Sunday, January 7, 2018 at her residence under the care of Hospice. The Eastern Star Service will be Saturday,  11:00 am followed by the Funeral Service  at Vertin-Munson Funeral Home, Wahpeton, with Rev. Jule’ Ballinger officiating. Visitation will be from 9:30 am, until the time of service at Vertin-Munson Funeral Home.  Interment will be at Fairview Memorial Gardens, Wahpeton.

Dolores Grace Ness was born April 19, 1929, in Aurdal Township, rural Underwood, MN, the daughter of Ingar and Clara (Grimstead) Bjorgo. She grew up near Underwood and Fergus Falls, attending rural school and graduated from Fergus Falls High School, the first in her family.  While in high school she worked for Spies Grocery Store and long had great appreciation for how kind the Spies family was to Delores and her sister LuVerne.  For 3 years she was a telephone operator at Slayton, MN. She was united in marriage to Jerome (Jerry) O. Ness on June 24, 1950. The couple lived in St. Louis while Jerry attended Logan College of Chiropractic. In September of 1954 they moved to Wahpeton where he operated his office, Dakota Chiropractic Clinic.  Dolores was a stay at home mother while raising their three boys.  Later Dorie would be his office manager. Jerry passed away November 15, 1980. Dolores continued to live in Wahpeton and later joined longtime family friend Earl Wienbar became life partners.  They spent summers at Ottertail Lake and winters in Texas. Earl passed away in May of 2002 and Dolores continued to live in Texas until she moved into a senior living facility in Maplewood called the Shores of Lake Phalen near her sons Brians business.

Dorie was a former member of Bethel Lutheran Church where she was active in the lady’s aid and taught Vacation Bible School. She was involved in Eastern Star where she was Worthy Matron and Grand Worthy Matron for the state of North Dakota. She enjoyed bowling in a bowling league and participated in national tournaments.  She loved going to all the sporting events at Wahpeton high school and well as at Science school.  She was also an avid bridge player.

In lieu of flowers, please give/support local youth in the community with your donations. Dolores's Memorial Folder
To order memorial trees or send flowers to the family in memory of Dolores Ness, please visit our flower store.