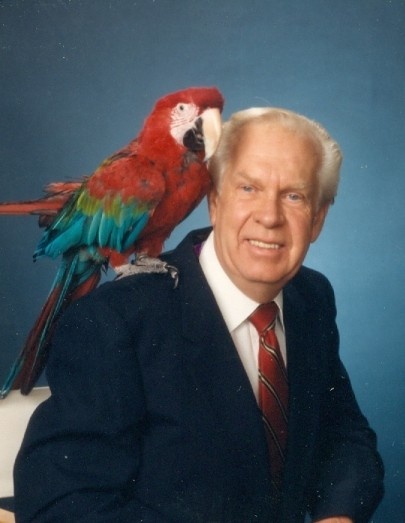 Donald R. Stewart, age 88, of Wahpeton, ND, passed away on Sunday, August 18, 2019, at Sanford Medical Center in Fargo, ND.  He was born on March 18, 1931, to Hiram and Doris (Redding) Stewart in Ashtabula, Ohio with English and Scottish ancestry.

Donald served as a Sergeant in the United States Army with his most significant duty assignment being in Germany with the A CO 759 MP BN. While in Germany, he received the Occupational Medal, which recognized his selfless service to provide force following the close of World War II. He later separated from the Army in 1953.

After graduating from The Chicago Academy of Fine Arts with his degree in Interior Design in 1956, he began working for Bob Caspers and Russell Munson at Vertin’s Furniture Store and Funeral Home in Wahpeton, ND in 1957 and later working with Bernard “Bun” Munson. In 1968, he started his own successful business, Custom Interior, Inc. in Wahpeton and later in Fargo, ND.

He was proud of the way he impacted lives with his impeccable interior designing and that he lived his whole life in his home, thankful to have never been placed in a nursing home.

He is preceded in death by his brothers, James and Richard “Dick” Stewart.

Donald is survived by his sisters, Janet Stewart of Tallahassee, FL, Joyce (Russell) Hartstock of Rome, OH, and his dear friends Meredith Mitskog, Dr. Alisa Mitskog and her husband, Allen Yaggie, all of Wahpeton, ND.

Donald was an uncle to many and will be missed by his loving nieces, nephews, family, and friends.

It was Donald’s wishes to donate his body to the UND Medical School.

To order memorial trees or send flowers to the family in memory of Donald Stewart, please visit our flower store.