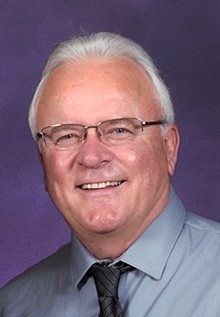 Donald J. Eichhorn, 62, of Wahpeton, ND, passed away peacefully at home surrounded by his family, Saturday, October 10, 2020, under the care of CHI Health at Home, after a six-year cancer journey. Visitation will be held of Thursday, October 15, 2020, from 5 PM to 7 PM followed by a 7 PM prayer service at St. John’s Catholic Church in Wahpeton. Visitation will continue on Friday, October 16, 2020, from 10 AM to 11 AM followed by his 11 AM funeral mass at the church. Fr. Dale Lagodinski will officiate the service. Interment will be at Calvary Cemetery in Wahpeton. Memorials are preferred to Roger Maris Cancer Center and CHI Health at Home Hospice. Due to the pandemic currently impacting the country, social distancing will be in place and masks are encouraged. Arrangements have been entrusted to Vertin-Munson Funeral Home.

Donald James Eichhorn was born on January 27, 1958, in Breckenridge, MN, to Dorothy (Roob) and Ervin Eichhorn.  He grew up and attended St. John’s school until sixth grade. He graduated from Wahpeton high school in 1976, where he excelled in wrestling. Don attended NDSCS, graduating in 1978, in pre-med.  He started chiropractic college in St. Paul MN, in the fall of 1978. After 10 days, he realized that was not the profession for him.  While in the Twin Cities the summer of 1978, he got a job working with a steel siding company.  Since he had started building houses with his dad at the age of 14, he learned the ropes of steel siding pretty quickly.  In the summer of 1979, he started Eichhorn Construction in Wahpeton. After 23 years, he decided he had enough of climbing up and down ladders. In 2002, Mike Bullinger from Western Products, convinced Don he would be a good siding and window salesman.   He continued working for Western Products until 2018 when he retired due to his health at age 60.  He truly enjoyed his work and his customers throughout his 40-year career and would have many repeat customers coming back for new products over the years. He got along well with his co-workers and made many lasting friendships there.

He met Karen Wald at a Vagts barn dance in May 1978.  It must’ve been love at first sight because after eight weeks of dating Don asked Karen to marry him while out on a pontoon ride on Wall Lake.  They were married in Edgeley, ND on May 26, 1979. They continued to live in Wahpeton their entire married life and raised their two sons.  Don was happy to have his sons working for him while in high school, teaching them many of the skills that his Dad taught him.

Don was a lifelong member of St. John’s Catholic Church and the Eagles Club in Wahpeton.  He served as chairman on the board of trustees for many years. Back in the 90s, he would bartend for wedding dances and spent many hours helping in the kitchen for functions and volunteered many hours remodeling the bar. For 30 years he was on a bowling league until his health declined.

Karen and Don were fortunate to take many trips throughout their marriage. In the 80s and 90s when he owned his business, he earned trips through Builder Supply in Fargo.  They got so used to taking a trip every other year, so when he started working for Western Products Karen continued to plan trips and Don never complained. Starting in 1983, Karen and Don enjoyed attending We Fest every year with family members and later camping every year with close friends. Karen somehow convinced Don that he enjoyed country music as much as she did. We all know he probably liked the socializing more than the music.

Don’s pride and joy were his four grandsons who he loved with all his heart.   They will remember him as a fun Grandpa who would wrestle and play with them when they were toddlers and who attended as many of their sporting events as possible.

In 2014, Don was diagnosed with Stage IV colorectal cancer that had spread to his liver. He responded well from the treatments up until this year.  From March-August 2020, the chemo that had been working so well was no longer successful. Don’s family would like to thank Dr. Denise Snow and staff (Renae), for the care and compassion he received at Roger Maris Cancer Center.  We truly believe he had an extra six years to spend with family and friends because of her exceptional medical knowledge.

He was preceded in death by his parents, Ervin and Dorothy; in-laws, Leo & Barbara Wald; and his grandparents.