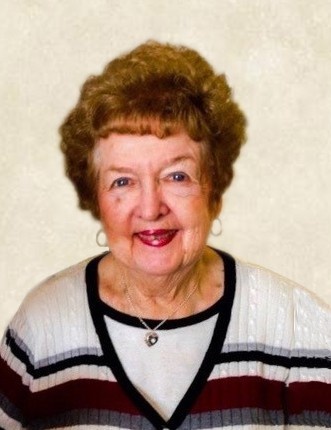 Doris "Dorie" J. Holen, passed away on Thursday, February 6, 2020, at CHI St. Francis Medical Center in Breckenridge, MN.  Her daughter, Sara, and son-in-law, Rick, were lovingly at her side as she peacefully entered heaven. A private family service will be held on July 27,2020, in Wahpeton, ND.

Dorie was born on Feb. 14, 1933 in Beach, North Dakota. She was the second child to Porter and Marian Gisvold.

Dorie’s father, Porter, accepted a call to be a pastor at Bethel Lutheran Church in Wahpeton, North Dakota, where Dorie attended primary and secondary school at Central School. Music was a big part of her formative years. She played piano, french horn, sang in the choir, and was a piano accompanist for the choir. She attended Concordia College, where she graduated with a Home Economics Degree. Dorie married Bruce Beithon during college and lived in Grand Forks, Iowa City, and St. Paul, before settling in Wahpeton in 1961 where she raised her four children: Kristi, Richard, Sara, and Joel. Dorie worked as a secretary at Bethel Lutheran Church before completing the Dental Hygiene program at North Dakota State College of Science in 1971.  She married the love of her life, Don Holen, in 1971, and they shared a beautiful unity.  Don became the stepfather to her four children. In 1976, after working locally as a dental hygienist, Dorie began teaching dental hygiene at NDSCS where she spent the next 17 years before retiring.

Dorie was guided by an unbreakable Christian faith.  She was active in the Stephen Ministry program, where she provided compassionate care to those hurting. Dorie and Don both took great joy in singing together with the Bethel Lutheran Church choir. Dorie was also honored and proud to be a long-time member of the P.E.O. Sisterhood.  She volunteered countless hours spreading her love by visiting people with disabilities.

Dorie took pride in being a fabulous homemaker.  She was a fantastic cook, baker and decorator. Her home was always inviting and adorned with a festive spirit for every holiday. Dorie’s favorite color was blue. This was evident in both her attire and her home decor, which included her proud display of Danish plates. Dorie enjoyed summers at the cabin on Ottertail Lake where she frequently served up incredible walleye dinners including delicious tomato pie!  Her daily devotions at the lake cabin on Sunday mornings with coffee are now legendary for all her children and grandchildren. Most importantly, Dorie will be remembered by her family and friends for her ability to truly live by the Fruits of the Holy Spirit, demonstrating love, joy, patience, kindness, goodness, faithfulness, gentleness, and self-control.  Dorie inspired many!

She was preceded in death by her parents, Porter and Marian; her husband, Don; her son, Richard; Don’s parents, Robert and Amanda Holen; Elmer and Ruby Beithon; and many beloved brothers-in-law and sisters-in-law.

In lieu of flowers, the family asks for memorials to please be sent to SAVE: Suicide Prevention and Awareness or the American Cancer Society.

To order memorial trees or send flowers to the family in memory of Doris "Dorie" Holen, please visit our flower store.