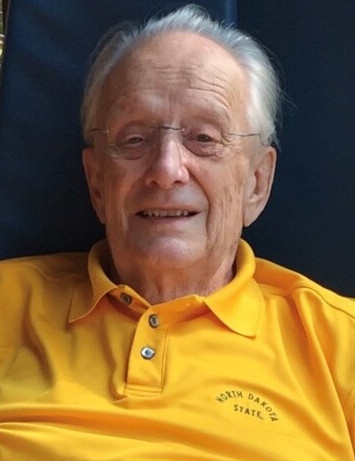 Bill graduated from Moorhead (MN) High School and earned his bachelor’s degree in Pharmacy from what is now North Dakota State University in 1951.  He served in the United States Army during the Korean War.

After receiving his bachelor’s degree in Pharmacy at North Dakota State University and completing his military service, Bill and MaryAnne moved to Wahpeton, North Dakota where

Bill managed and then owned the Wahpeton Drug Company. As with most pharmacies at that time it had a soda fountain with sandwiches, stools and tables and chairs and was a gathering place on the main street of Wahpeton, Dakota Avenue.

As Bill originally managed and owned a Rexall Pharmacy, he was instrumental in establishing college scholarships for pharmacy students at NDSU which is still ongoing.

Bill fervently believed in and acted upon the power of education to lessen the fetters hobbling human potential. He was actively involved in Wahpeton Public School activities and the Wahpeton Boy Scouts and promoting public health education. He recognized that a crown jewel of our communities is the North Dakota State College of Science. He helped establish the Dental Hygiene Program at NDSCS and gave unstintingly of his time and resources to the College as a teacher and benefactor. He and MaryAnne established in perpetuity scholarships for pharmacy students at the NDSU College of Pharmacy.

Bill loved Wahpeton for more than 70 years. He followed the example he witnessed set by Wahpeton’s most prominent citizen, RJ Hughes, concerning community betterment. Bill was a member and president for 4 years of the Wahpeton Park Board and Park District where he was instrumental in establishing the camping area in Chahinkapa Park among other endeavors. Bill was an active member of Wahpeton’s Community Development Corporation, Downtown Development Corporation, and long-time member and office holder of the Wahpeton Chamber of Commerce. He was a member of Kiwanis, Masons, and numerous pharmaceutical and charitable organizations. He occupied many positions over the years at Bethel Lutheran Church. Bill expressed his philosophy to the Daily News in 2009: “First my faith, then my family, then my profession – that’s where I start everything I do…” He lived his faith.

Anyone who knew Bill recognized his compassion, empathy, care, and concern for his fellow human beings. From his Christian faith, he followed two guiding stars: Strive mightily to live a moral life and help all those you can. His example to his children, family, and others cannot be calculated.

Bill’s beloved wife MaryAnne passed away 40 days before him. He was also preceded in death by his son Craig David Grosz.

Vertin-Munson Funeral Home in Wahpeton has been entrusted with arrangements. The family requests that any memorials be made to a charity of your choice.

To order memorial trees or send flowers to the family in memory of Dr. William "Bill" Grosz, please visit our flower store.
Open