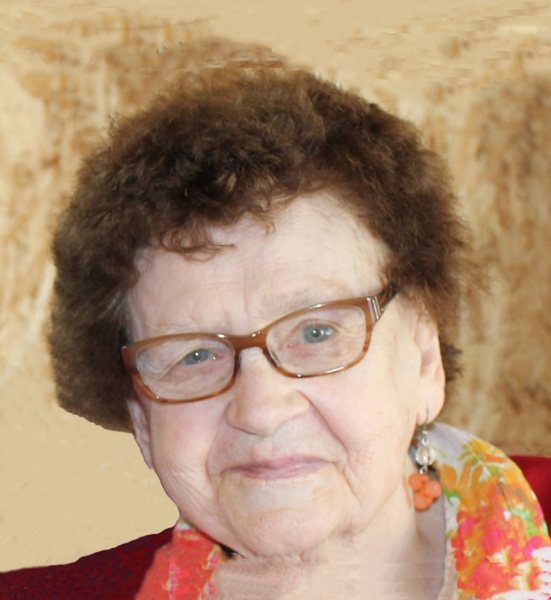 Edna Gladys Guderian, 95, of Wahpeton, ND, passed away on Tuesday, January 8, 2019 at CHI St. Francis Nursing Home in Breckenridge, MN. Visitation will be 1:30 pm to 2:30 pm followed by the funeral service at 2:30 pm on Saturday, January 12, 2019 at Vertin-Munson Funeral Home, Wahpeton, ND, with Rev. John Andrews officiating. Burial will take place at a later date at Riverside Cemetery, Breckenridge, MN. Arrangements have been entrusted to Vertin-Munson Funeral Home, Wahpeton.

She was born on May 27, 1923 in Fergus Falls, MN the youngest of thirteen children of Ole and Marie (Lien) Fronning.   She was baptized and confirmed at the Aastad Lutheran Church.  She attended country school at District 118 in Aastad Township and graduated from Fergus Falls High School in 1941.

After high school she worked at the Five and Dime Store in Fergus Falls.  As a young girl she had a dream to travel to California and her independent spirit took her there where she lived at Long Beach and worked at Manning’s Café & Bakery.  She returned home after having this adventure fulfilled and worked at Kresges and also at Sears in Fargo, ND

At a dance in Barnesville, MN she met her future husband, Elmer Guderian of rural Kent.  He had just completed his duty of service as a Marine serving his country in the battle of Iwo Jima in WWII.  While dating, Edna contracted polio and was taken to the University of Minnesota Hospital in Minneapolis in an ambulance.  She spent six weeks at the hospital and her recovery was deemed a miracle.

She and Elmer were married on December 7, 1947 at the Aastad Lutheran Church, the same anniversary date of her parents.  Edna and Elmer made their first home in Kent, MN where Elmer worked as a trucker.  Later they moved to Breckenridge where Elmer worked for the Wilkin County Highway Department and she worked at many local restaurants as a waitress.  She and Elmer were blessed with six children.  Their first child died from neuroblastoma at the age of five.  Edna’s priority and love was always her family

In 1997 after they retired they moved to Fergus Falls, MN.  As a couple they enjoyed dancing, playing cards and being involved in family activities.  In 2005 they sold their home and moved to the Village Cooperative in Fergus Falls as one of the first charter owners.

In 2007 Edna suffered a heart attack and had bypass surgery.  Her recovery was a difficult one.  While in the hospital she had cardiac arrest and went into a coma.  Her family was told that she had suffered brain damage and would probably remain in a vegetative state.  Her family gathered for prayer and released Edna to God.  They prayed for a miracle but only if it was His will.  Edna recovered completely and later told the story of having an out of body experience and seeing angels in her room.  She was upset with her family for praying for her recovery as she so wanted to go to her heavenly home.  But after a slow and difficult recovery she returned home and was continued to be used by God in His way and for His purpose.

Edna was a woman who loved people and who had a knack for making people laugh with her outgoing personality and her gift of being witty.  She had a humble simple quiet faith in God as her creator, sustainer and savior.  She will be dearly missed by all who knew her and called her mom, grandma, great-grandma, and friend. Edna's Memorial Folder
To order memorial trees or send flowers to the family in memory of Edna Guderian, please visit our flower store.