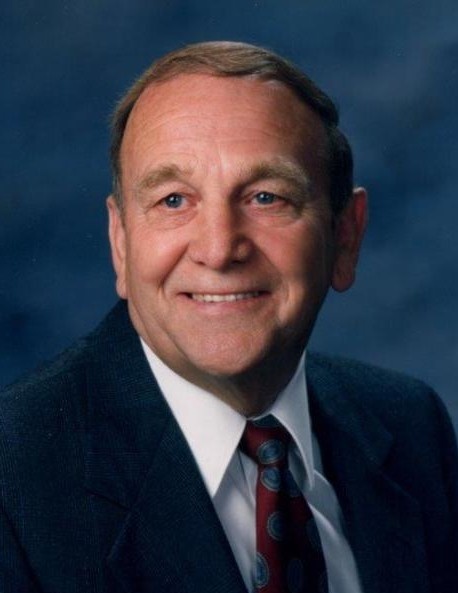 Edward “Eddie” Dahlgren, 83, Breckenridge, MN passed away on Friday, October 20, 2017 at Sanford Medical Center, Fargo, ND.  Funeral services will be on Wednesday, October 25, at 11:00 AM at Grace Lutheran Church, Breckenridge, MN with Rev. Ross Fritz officiating.  Visitation will be on Tuesday from 5 PM to 7 PM with a prayer service at 7 PM at Vertin-Munson Funeral Home, Wahpeton, ND.  There will also be visitation one hour prior to the service on Wednesday at the church.  Interment will be at Fairview Cemetery, Wahpeton, ND.  Arrangements are entrusted to Vertin-Munson Funeral Home, Wahpeton, ND.

Edward was born January 29, 1934, in Wahpeton, ND, to Oscar and Ida (Lehman) Dahlgren.  He attended local elementary schools and graduated from Wahpeton High School in 1953.

Eddie was athletically talented and participated in many sports, especially football, basketball and baseball while in high school, at NDSCS, in the Marines and local leagues.

and winning the game.

He continued his education at the North Dakota State School of Science majoring in HVAC systems, finding time to participate in sports and working parttime.  After graduating in 1956, he enlisted in the Marines and was stationed in San Diego, CA, where he was honored to play on the Marines’ basketball, baseball, and football teams.  He was discharged in 1958, and returned to Wahpeton and his high school sweetheart, Donna Ewald.

They were married on August 15, 1959, and purchased their first home in Breckenridge, where they raised their three children.

He began his HVAC career at Comstock and Sons in 1959, and then worked for Erickson Plumbing and Heating in Breckenridge until 1978.  When Erickson’s closed, he was employed by Gibb & Sons for 4 years and spent the last 15 years at Anheuser Busch in Moorhead, retiring in 1999.  Ed and Donna built their dream home in Breckenridge in 1978, where they have lived ever since.

Eddie loved watching his children and grandchildren play sports, weekends at the lake, helping on the farm during harvest, traveling, and could always be found working on a variety of projects.

Eddie was preceded in death by his parents, his sisters, Agnes Runyan, JoAnn Jordan, and Maxine Daeley, and his brothers, Donald and Charles Dahlgren.

He was a kind and loving husband and was very proud of his family.  May he rest in peace.