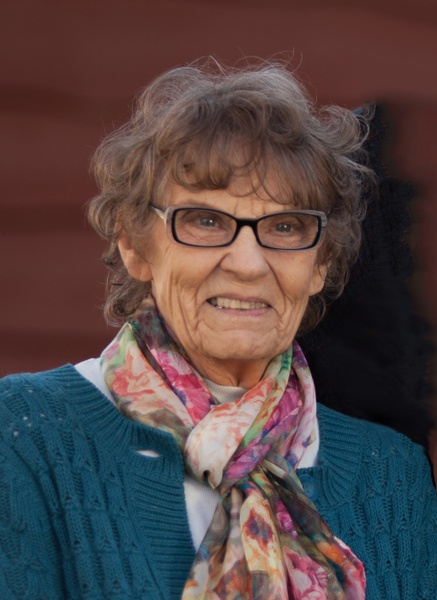 Elaine A Boll 81, Richville, MN, formerly of Wahpeton, ND, passed away Thursday, June 11, 2020, at her home under the care of Hospice of the Red River Valley surrounded by her loving family.  Visitation will be held Tuesday, June 16, 2020, from 9:30 AM to 10:30 AM, with a Rosary at 10:30 AM followed by a time of sharing. Her Mass of Christian Burial will begin at 11:00 AM, at St. John’s Catholic Church in Wahpeton.  Fr. Dale Lagodinski will officiate the service. Burial will be in Calvary Cemetery in Wahpeton.  Arrangements have been entrusted to Vertin-Munson Funeral Home, Wahpeton.

Elaine was born March 7, 1939, to Elmer and Alice (Wennerstrand) Gullickson in Evansville Township, MN.  Elaine joked about having her 1st baby at the age of 8, she was the eldest daughter of a large family and cared for her brothers and sisters while her mother did chores.   She had a huge fondness for babies and children her entire life.  Elaine graduated from the Fergus Falls High School Class of 1957.  She met William Boll in Fergus Falls, they were married at St John’s Catholic Church in November 1959, Elaine was baptized at St John's the spring of 1960, she embraced her faith passionately. Elaine and Bill were blessed with a daughter, twin boys, and another son.   Homemaker was not the only hat Elaine wore, she worked for Farm Bureau in Breckenridge for 10 years, as Credit Manager for Cenex in Breckenridge and later in Fairmount ND.  She participated in many sports in her adult years, loved swimming, skiing and dancing.  Her passion for children kept her involved with her children and later her grandchildren’s activities.  Elaine and Bill retired and moved to Ottertail Lake in 2004.

In lieu of flowers, donations may be made to St. John’s Catholic Church or Hospice of the Red River Valley.

To order memorial trees or send flowers to the family in memory of Elaine Boll, please visit our flower store.