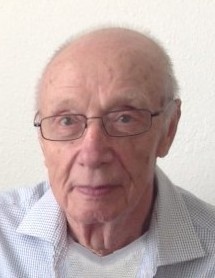 Eugene F. Kemmet, age 87, of Wahpeton, ND, formerly of Dawson, ND, passed away on Thursday, June 24, 2021, at The Leach Home in Wahpeton. Visitation will be held on Wednesday, June 30, 2021, from 5 PM to 7 PM followed by his 7 PM prayer service at Vertin-Munson Funeral Home in Wahpeton. Visitation will continue at Bethel Lutheran Church in Wahpeton on Thursday, July 1, 2021, from 10 AM to 11 AM followed by his 11 AM funeral service. Pastor Erika Buller will officiate the service. Burial will be in Dawson Cemetery in Dawson, ND. Arrangements have been entrusted to Vertin-Munson Funeral Home.

Gene was born November 23, 1933, in rural Dawson to Fred and Magdalena (Schauer) Kemmet. The third of four sons, he grew up on the family farm and attended a one-room country schoolhouse. He was drafted into the US Army in January of 1957 and served until being honorably discharged in late December of 1958, spending most of his service in West Germany.

After his discharge, Gene moved to Bakersfield, CA, with his brother, Allen, and worked as a diesel mechanic for International Harvester dealerships. While living in Bakersfield, he met another pair of North Dakota brothers, Ray and Curt Hogfoss, who introduced him to their sister in 1967. Gene married Marlyce Hogfoss in 1969, and the couple moved to Anaheim, CA, followed by Salinas, CA in 1972. While in Salinas, the couple added a son, Michael, to the family in 1976. In 1978, the family returned to North Dakota when Gene accepted a position teaching diesel mechanics at North Dakota State College of Science (NDSCS) in Wahpeton, where he lived for the rest of his life.

Gene taught hydraulics at NDSCS for 19 years and developed a training program for Bobcat technicians while there. After retiring from NDSCS in 1998, he worked for Bobcat as an on-site trainer, traveling across the United States as well as to Saudi Arabia, Kuwait, and multiple South American countries. Besides his work as an instructor, Gene spent his summers and many weekends helping his parents and brothers at the family farm in Dawson, ND.

Gene was active in service with both the Wahpeton and Dawson communities, especially with the churches he attended. He was 40-year member of Dawson’s American Legion branch, as well as a long-time member of the Dawson Fire Department. In Wahpeton, he was a regular fixture Sundays at Bethel Church as an usher, candlelighter, or whatever else needed doing that particular morning. He was also a fixture most mornings at the Fry’n Pan with his coffee group. Among his family and friends, he was always known as the person to call if you needed help or if something was not working quite right.

Eugene is survived by his son, Michael Kemmet; younger brother , Lenny Kemmet; and many nieces and nephews.

He was preceded in death by his wife of 50 years, Marlyce; parents, Fred and Magdalena Kemmet; and older brothers, Allen and Clarence Kemmet.

To order memorial trees or send flowers to the family in memory of Eugene Kemmet, please visit our flower store.