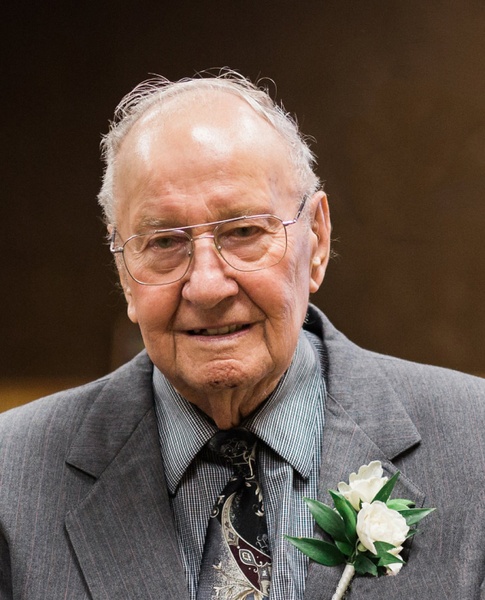 Francis J. Gilles, 95, formerly Wahpeton, ND, passed away Saturday, May 26, 2018 at CHI St. Francis Nursing Home, Breckenridge, MN. The Funeral Mass will be Thursday, May 31, 10:30 a.m. at St. John’s Catholic Church, Wahpeton, with Rev. Dale Lagodinski officiating. Visitation will be Wednesday from 5 PM to 7 PM with a 7 PM Prayer Vigil, followed by a Knight’s of Columbus Rosary at St. John’s Catholic Church. There will also be visitation one hour before the service on Thursday. Interment will be at Calvary Cemetery, Wahpeton, ND. Arrangements have been entrusted with Vertin-Munson Funeral Home, Wahpeton.

Francis Joseph Gilles was born March 9, 1923, the son of John and Theresa (Hermes) Gilles in Wahpeton, ND. He attended rural schools and graduated from Wahpeton High School in 1940. Francis attended NDSU and served in the Merchant Marines. He farmed with his father, later taking over the farm.

Francis was united in marriage to Jane Rowland on September 27, 1958 in Wheaton, MN. To this union, seven children were born.  Francis continued farming and was later joined by his sons, who now operate the family farm.

Throughout his lifetime, Francis was a member of the ND Pork Producers Association and served as president of the SE Region. Francis served as a Director on the Southern Red River Valley Sugarbeet Board. He was a proud member of the original Board of Directors of Minn-Dak Farmers Co-Operative. In 1982 Francis received the Minn-Dak Pioneer of the Year Award.  Francis also operated Gilles Country Sales which sold Schwiess Farm Equipment. He retired from farming in 1988 but remained active on the farm, especially during beet harvest.  Francis and Jane moved in to Wahpeton in 1993. The entire family enjoyed spending several summers at West Battle Lake, MN.

Francis was a lifelong member of St. John’s Catholic Church, where he served on both the Finance and Parish Councils. He served as an Usher for over 60 years. He was a member of the 4th Degree Knights of Columbus, and of the American Legion. Over the years, Francis enjoyed golfing, poker nights with his buddies and woodworking.

Our husband, dad, grandpa and great-grandpa was a devoted Christian man.  He loved us all and shared his great values with us.   He taught us to work hard, to share our time and talents with others, and then to relax and enjoy the fruits of our labor.  We will miss him forever.

He was preceded in death by his parents, John and Theresa Gilles; his brothers, Merrill, Michael, Marion, Lambert, and Tony Gilles.

If you wish, in lieu of flowers, you may make a donation to the St John’s Building Fund, which will be used to provide a weather protected entrance for the front of the Church. Francis's Memorial Folder
To order memorial trees or send flowers to the family in memory of Francis Gilles, please visit our flower store.