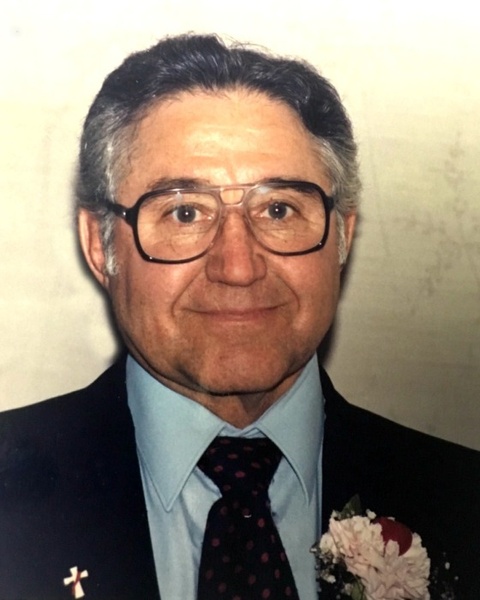 George E. Ethier, 92, Breckenridge, MN, formerly Wahpeton, ND, passed away Tuesday, February 20, 2018 at CHI St. Francis Health in Breckenridge. The Funeral Mass will be Friday, February 23, 1:00 PM at St. John’s Catholic Church, Wahpeton, with Rev. Dale Lagodinski officiating. Visitation will be Thursday from 5 PM to 7 PM with a 7 PM Prayer Vigil and one hour before the service on Friday, all at St. John’s Catholic Church. Interment will be at Calvary Cemetery, Wahpeton in the spring. Arrangements are with Vertin-Munson Funeral Home, Wahpeton.

On Tuesday, February 20, 2018, the world lost a beloved husband, father, grandpa and Catholic deacon. In truth, he was more than ready to go, but our hearts break to say goodbye.

Deacon George Edward Ethier (aka “Grandpa”) was born 92 years ago on March 28, 1925, in Argyle, Minnesota. His parents, Alfred and Agnes Ethier, were farmers and the infamous “Dustbowl Days” were no kinder to them than to anyone. His dad lost the farm, twice. Yet, “we always had enough food on the table,” George once acknowledged. “Dad seen to that. They were very trying times, but we were united as a family.”

George’s education began at the age of six. With one hand holding his books and the other his lunch, (most likely a couple of pancakes rolled with sugar, a peanut butter sandwich or - on a good day - a bit of pork), George would make his way to the one-room country schoolhouse the children jokingly referred to as “Brushwood College.” He spent eight years there and then transferred to the parochial school in town. He left, two years shy of a diploma, on December 7, 1941. “I got real gungho to go into the Marines,” he said.

George spent a total of 33 months overseas, serving as a US Marine in Tarawa, Saipan, Tinian, and Okinawa. He rarely talked about his World War II experience but when he did, he spoke matter-of-factly. He saw “a lot of combat.” He “grew up in a hurry.” Still, we know he spent many, many sleepless nights in the foxhole, alone with his rosary and his fear, and we’ve seen the creased black-and-white photograph that he retrieved from the body of an “enemy.”

The boy who went off to war returned a man. He brought with him a budding hope for the future in his heart and the photo of a lovely young lady in his pocket. A year and a half later, on January 29, 1947, George and Rita were married in Long Beach, California. They spent time in Jamestown, ND and Ortonville, MN before moving to Wahpeton for George's work with Ottertail Power Company. Together they welcomed six children, 23 grandchildren and many, many great-grandchildren in their 70 years of marriage. They were deeply in love, and George had no greater sorrow than when he lost his beautiful bride one year ago.

In 1980, George was ordained a deacon in the Fargo Diocese and spent many years serving the Catholic Church and his beloved parish of St. John's. He had a true servant's heart and was as happy baptizing babies as he was driving a combine on his sons-in-law's farms. Simply put: To know George Ethier was to love him. His cheerful smile, his friendly demeanor, his delicious Sunday dinners and his fondness for a nice, cold beer: these were the hallmarks of a man that loved the Lord and loved his family.

A true Marine to the very end, George was not afraid of death. “We’re all going to die,” he once said, “It’s just when the Lord calls us. And if you’re ready to meet Him, what’s there to be worried about?”

Rest in peace and Semper Fi, dear George. We love you more than these words can say.

George was preceded in death by his wife, Rita, and his granddaughter Kellee Johnson.

To order memorial trees or send flowers to the family in memory of George Ethier, please visit our flower store.