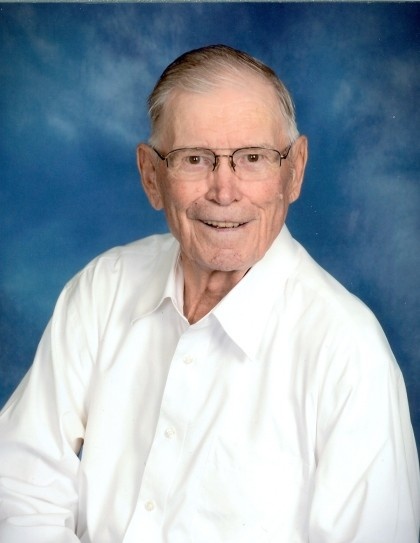 Gerald Stubson, 91, of Colfax, ND passed away on Saturday, March 10, 2018 at CHI St. Francis Hospital, Breckenridge, MN.  His funeral service will be held at 11:00 am on Wednesday, March 14, 2018 at Our Savior’s Lutheran Church, Colfax, with visitation one hour prior to the service at the church.  Burial will be held in the spring at Fairview Memorial Gardens, Wahpeton, ND.  Arrangements are entrusted to Vertin-Munson Funeral Home, Wahpeton.

Gerald Ingram Stubson, was born on January 13, 1927, in Colfax, ND, the son of Ingram and Esther (Sletmoe) Stubson. He attended grade school in Colfax and graduated from Colfax High School. He entered the US Army and served in Korea during World War II. Upon his return, he was united in marriage to Lorraine “Mitsy” Mitskog on August 20, 1950, at Richland Lutheran Church, rural Walcott. The couple briefly moved to Buxton, ND and then to Abercrombie, ND before moving back to Colfax to work at the Colfax Grain Elevator. Gerald initially managed the elevator and eventually secured ownership. After Colfax Grain, he worked at Southeast Grain in Mooreton and started Little Green Tree Service. In later years, he enjoyed helping his wife at the Colfax Cafe and daughter, Nancy B, with her catering company. After the passing of his wife in 2004, he lived with his grandson Nathan Berseth and his family in Colfax. In August 2017, he moved into St. Catherine’s Living Center in Wahpeton, ND.

Gerald was a lifelong member of Our Savior’s Lutheran Church. He was building chairman during construction of the new church in 1965. Along with many community members, Gerald assisted in the formation of the Colfax Pool. Gerald loved the Colfax community where he also served on the Colfax/Richland #44 school board. After serving his country, Gerald was proud to be actively involved as a former Commander and lifelong member of Leroy Ista Post #9070 of Colfax. Upon its closure, Gerald became a member of the McLeod VFW. Above all, he loved his family, grandkids and great- grandkids. They brought great joy to his life. For years, Gerald enjoyed his horses, bowling, fishing in Canada, and sponsoring the Colfax Grain Men’s Softball Team. In 1964, Gerald and Mitsy built a cabin on South Turtle Lake. They enjoyed gathering with friends and family at the cabin. Gerald continued to enjoy the cabin through last summer.

He is preceded in death by his wife, Lorraine, April 2, 2004; his daughter, Nancy Berseth, October 5, 2006; his parents, Ingram and Esther Stubson, two grandchildren, his brother-in-law Dr. Curtis Mitskog and his niece Nicole Mitskog. To plant a beautiful memorial tree in memory of Gerald Stubson, please visit our Tree Store.

To order memorial trees or send flowers to the family in memory of Gerald Stubson, please visit our flower store.