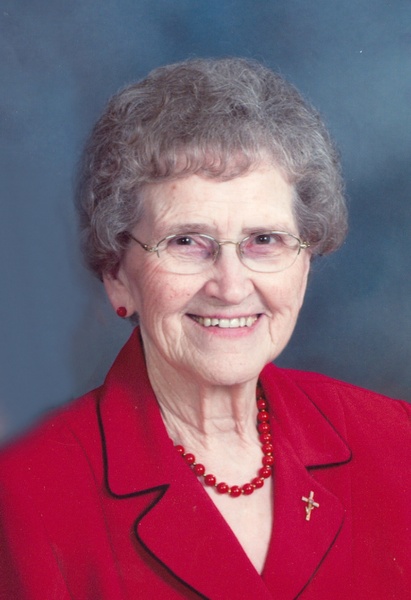 Gertrude Braun, 90, of Hankinson, ND, formerly Breckenridge, MN passed away on Friday, September 15, 2017 at St. Gerard’s Community Nursing Home, Hankinson.  There will be a Christian Mothers/Family Rosary held at 2:30 pm, followed by visitation from 3:00 pm to 5:30 pm, with a 5:30 pm prayer service on Monday, September 18, 2017 at Vertin-Munson Funeral Home, Wahpeton, ND.  Visitation will continue from 9:00 am to 10:00 am, followed by her funeral mass at 10:00 am on Tuesday, September 19, 2017 at St. John’s Catholic Church, Wahpeton, with Rev. Dale Lagodinski officiating.  Burial will be at St. Mary’s Catholic Cemetery Breckenridge.  Arrangements are entrusted to Vertin-Munson Funeral Home, Wahpeton.

After years of living by her favorite motto,   “Let go and let God” she has let go of this earthly life and let God lead her home to her eternal reward.  She lived her 90+ years as a loving daughter, sister, wife, mother, and grandmother.  She will be welcomed home by her parents James and Margaret Mooney, her husband Edwin, her son James, her seven brothers and sisters (Mary, Leo, Vincent, Walter, Sister Agnes, Francis, and Margaret), as well as her father and mother-in-law Henry and Mary Braun, and her great-grandsons Hayden Gregoire and Isaiah Pudwill.

Gertrude was born on December 28, 1926, the youngest child of James and Margaret Mooney of Hillsboro, ND.  After graduating from high school in 1944 she did house work for several local families and also worked as a telephone operator in Fargo, ND.  On October 2, 1947 she was united in Marriage to Edwin Braun of Rosholt SD.  They made their home on a little farm south of Breckenridge, MN where in addition to raising crops and livestock, they also raised five sons and five daughters.

In 1985 they retired from farming and moved to the Pelican Rapids, MN area and spent 21 happy years with new friends and neighbors, especially those they met at St. Leonard’s Catholic Church.  In 2006 the couple moved back to Breckenridge.  After 60 years of marriage, Edwin passed away on December 5, 2007.

Besides being a very busy farm wife and mother, Gertrude enjoyed being a member of St. Mary’s Church circle of Breckenridge and St. Leonard’s Church circle of Pelican Rapids.  She also was an active member of the Confraternity of Christian Mothers, the Lake View Homemakers Club, and the Mother Cabrini Mission Circle.  She spent many happy hours volunteering at church functions and babysitting her grandchildren.

Gertrude was a quiet, gentle soul who will be remembered for the many loving things she did for her family on a daily basis.  Her greatest treasures were her ten children and her many grandchildren.  Her legacy to them includes her examples of great devotion to family and her strong religious faith.  Gertrude often had a prayer on her lips and her rosary in her hands.

Though we entrust our dear Mother to the mercy of the Lord, please continue to pray for the repose of her soul. Gertrude's Memorial Folder
To order memorial trees or send flowers to the family in memory of Gertrude Braun, please visit our flower store.