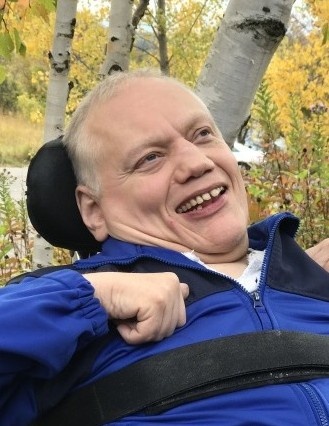 Glenn was born on June 8, 1956, in Hankinson, North Dakota, to Marlin and Beatrice Bergman, he was the 4th of six boys in his family. On July 30, 1958 Glenn was placed in a foster home. On November 28, 1959 he was admitted to the State Developmental Center and then was moved to San Haven when he was 7 years old. He remained there until his return to Grafton on December 17, 1987. Glenn came to Red River Human Service Center on September 1, 1993.

While at RRHSF, Glenn enjoyed going to the park and the lake, walks around the neighborhood, and just relaxing in the outdoors.  He enjoyed going to community events when possible and listening to music. People would often say, Glenn is always a happy person and a joy to be around. Glenn was known for his contagious smile and warm heart.

Just because we had to part

As long as you remember me

I’ll live in your heart

Thank you, to all of the staff at RRHSF who have become family to Glenn over the many years. Your dedication to Glenn and giving him the best life he could live will always be remembered. Glenn's Memorial Folder
To order memorial trees or send flowers to the family in memory of Glenn Bergman, please visit our flower store.