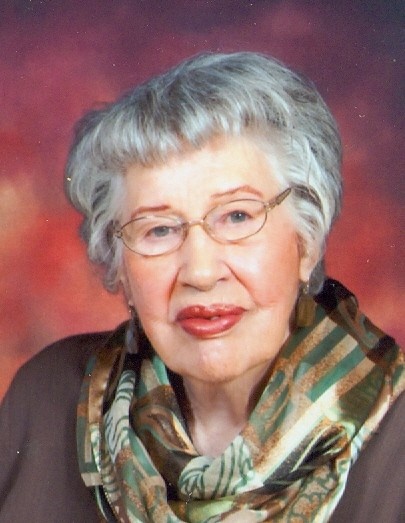 Grace Littke, 99, of Wahpeton, ND, passed away on Saturday, October 6, 2018 at St. Catherine’s Living Center in Wahpeton.  Her funeral service will be held on Thursday, October 11, 2018 at 11:00 am at St. John’s Catholic Church, Wahpeton, with visitation one hour prior to the service.   There will also be a Christian Mother’s Rosary starting at 10:00 am.  Burial will be at St. Anthony’s Catholic Cemetery, Mooreton, ND.  Arrangements are entrusted to Vertin-Munson Funeral Home.

Grace Anna Littke was born on June 12, 1919, to Herman and Rose (Weber) Thiel in their farmhouse at Mooreton, North Dakota.  She grew up on this farm in Antelope Township where she attended the Antelope Consolidated School through 12th Grade.  After her father died in 1936, Grace moved to Wahpeton with her mother and siblings, Alvin and Sarah.  She attended North Dakota State College of Science in Wahpeton, ND and then began employment with the Northwestern Bell Telephone Company as a telephone operator.  Grace met her husband, Edwin Littke of Mercer, ND while he was attending NDSCS, and they were married on June 2, 1942, at St. John’s Catholic Church, Wahpeton, ND.  Grace was a homemaker, and she and Ed raised their five children in Wahpeton.

Following her husband’s death in 1979, Grace joined the Avon Corporation in 1980 and continued to sell and deliver Avon until the golden age of 96.  During her life, she had memberships with NDSCS Faculty Wives, Christian Mothers, Women’s Church Auxiliary, and Eagles Auxiliary.

She loved spending time with her family, her many nieces and nephews, and her many “Avon” friends.  Grace also enjoyed bowling, crocheting, dancing, reading, and traveling vacations.  She loved the Lord and her church; it was rare to not see her at the Saturday night service at St. John’s Catholic Church. She would talk about Heaven and the grand reunion ahead. She remained in her apartment on Fifth Street North with the assistance of her son, Steve, and especially her granddaughter, Cynthia Dyer, who lived and cared for her since July 2016.

Grace was preceded in death by her parents, her husband, Edwin in 1979, a son, John Paul in 1994, and several nieces and nephews. Grace was the last of Herman and Rose Thiel’s ten children: five brothers: Alvin, Arthur, LeRoy, Walter, and Edward Thiel, and four sisters: Viola Winter, Alice Gast, Sarah Muehlberg, and Clara Mauch.