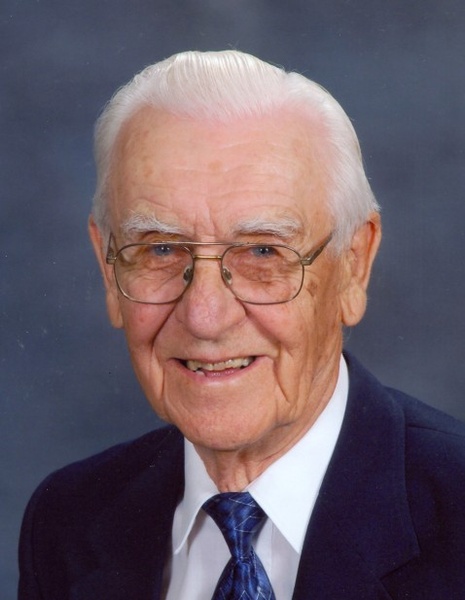 Harold “Heb” Diederick, 100, of Wahpeton, ND, passed away on Monday, September 13, 2021.  Visitation will be held on Monday, September 27, 2021 from 5:00 pm to 7:00 pm, followed by a prayer service at 7:00 pm at Vertin-Munson Funeral Home, Wahpeton.  Visitation will continue on Tuesday, September 28, 2021 from 9:30 am to 10:30 am, followed by his memorial service at 10:30 am at Evergreen United Methodist Church, Wahpeton, with Rev. Mary Ann Bernard officiating.  Burial will be held at Fairview Memorial Gardens.  A live stream of his services will be available on the funeral home’s website.  In lieu of flowers, donations can be made to the NDSCS Alumni Foundation, Wahpeton American Legion Baseball, or Evergreen United Methodist Church.  Arrangements are entrusted to Vertin-Munson Funeral Home.

Harold John Diederick was born on July 15, 1921 to John and Agnes (Kosek) Diederich in Wahpeton, ND.  He grew up in Wahpeton and attended school where he was involved in basketball, baseball, and with the school newspaper.  After graduating high school in 1940, Heb attended NDSCS in Wahpeton where he played and lettered in basketball.  In 1943, he was drafted into the U.S. Army where he served in Germany, Austria, and France in General Patton’s Headquarters.  Heb’s plan was to serve on the front lines until his commander found out he had the knowledge of operating a mimeograph from his time working with the high school newspaper, so he served his time as a mimeographer until he was honorably discharged in 1946.

Heb was married to Jean Kinsman on September 13, 1947 in Minneapolis, MN.  They made their home in Wahpeton where they raised their three sons.  Heb worked at the Globe Gazette, and later served as a clerk for the U.S. Postal service until he retired in 1976.  The couple moved to Otter Tail Lake, MN, in 1988.  They enjoyed their time at the lake where they made many friends and hosted several Tom and Jerry parties.  In 2012, they decided to move back to Wahpeton to be closer to family where they lived at Fourth Avenue Manor.  Jean passed away on January 12, 2017.  Heb passed away on what would have been their 74th wedding anniversary, and now can celebrate it together in heaven.

Heb stayed very involved in sports throughout his life by bowling, golfing, and playing baseball.  He played on the 1946 Wahpeton Amateur Baseball team that won a state title; a tournament where he was the winning pitcher in all four games, striking out 33 batters in a total of 27 innings.  After his playing days were over, he volunteered his time by driving the Med Van, selling tickets to the Wahpeton Legion Baseball benefit, and working at local baseball tournaments by taking tickets at the door.  His involvement in local baseball lasted over 70 years.  Heb could always be found at any NDSCS Wildcat sporting event, and he and Jean were honored to receive the Catbackers of the Year award.  He was a member of the Evergreen United Methodist Church, the American Legion, the State Amateur Baseball Hall of Fame, the State American Legion Baseball Hall of Fame, the Richland County Sports Hall of Fame, and was a member of the Wahpeton Bowling Association Hall of Fame.

Heb was a friendly man who always had a hug for you, and never would shy away from helping someone else.  He loved his family and cherished his time spent with them.  He will be remembered for using duct tape to fix anything and everything, taking his grandchildren fishing, buying them baseball cards, and always having quarters available for them anytime they wanted to buy something.  He also enjoyed spending his time playing cards, especially cribbage, bridge, and pinochle, and loved dancing with Jean.

He was preceded in death by his parents, John and Agnes Diederich; his wife, Jean Diederick; two sisters, Shirley Nastrom and Lois Nelson; and one brother, Donald Diederich.