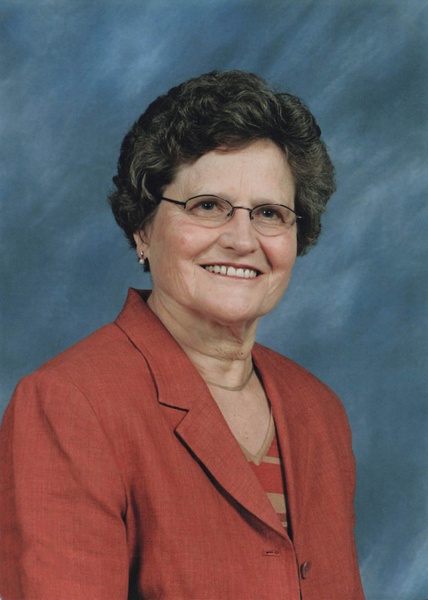 Helen attended nurse’s training in Little Falls, MN. The Franciscan sisters were mentors who remained her friends for a lifetime.

In 1955, she married Herman Beyer who called her “Fitz.” They farmed near the Red River on the North Dakota side of Brushvale, MN. They enjoyed playing whist til wee hours in the morning at the McKibbens and Johnsons. 200 chickens were raised every summer and the family never tired of the many delicious ways she could cook chicken, bake fresh bread and prepare vegetables from a large garden. Helen always honored Sundays with family time at Milnor family get-togethers and picnicking at Pebble Lake with a stop at the Breckenridge Dairy Queen for nickel ice cream cones. She made sure her children attended swimming lessons and were active 4-H members. Wayne and Carol graduated from Richland 44.

In 1975, Herman and Helen started cash renting their section of land and moved to Wahpeton along the Bois de Sioux Golf Course. Ron, Steve, Dan, Vicki and Dale graduated from Wahpeton.

Helen was a registered nurse on the heart floor at St. Francis Hospital over her career. She was a skilled cardiac care professional who was passionate about helping people’s health with outstanding doctors like Dr. Duane Strand who then became her trusted physician.

After retirement, Helen fulfilled her Dream of World Travel and visited six Continents and over 40 Countries. She especially enjoyed traveling with her son, Steve, and his spouse Herve. She toured Israel, Egypt, Rome, Singapore, Vietnam, Paris, London and Germany among her travel destinations.

Helen believed in helping family when they needed it during their growing and working years and was always very generous with her children and grandchildren. She knew time was the best gift possible as her positive, encouraging support influenced family with their education, sports, hobbies and careers. Helen painstakingly created themed birthday cakes like panda bears, monkeys and football players for her grandchildren. Whatever they liked was going to be baked with colorful frosting.

She loved volunteering at St. John’s Catholic Church, meeting retired nurse friends socially once a week and volunteering to operate the Prairie Rose Carousel. She was an exceptional seamstress with her Singer sewing machine, sewing clothes for her seven children during school years, repairing tattered flags for the parks and mending clothes for family and friends. Her hard work ethic was admired by family and friends.

Helen knew the importance of an active healthy lifestyle. As a nurse, she walked the mile to the old hospital along the river, using the Chahinkapa Park walk bridge. She was a tough Bohemian who cross-country skied around the golf course in the winter into her 80’s. Helen went for early morning walks on the trails and cleaned the city by filling a plastic grocery sack with litter. She was competitive and always looked forward to defending her age group in the annual St. Francis Walk. Helen quickened her pace from a walk to a run to pass anybody with gray hair in front of her.

Helen was a healthy eater and enjoyed getting pheasants from her son, Ron. Pheasant stir fry was her favorite dish, as attested by every family member who would stop by for a meal. She enjoyed cooking pheasant dumpling soup for the Minnesota Twins Winter Caravan and her baseball heroes like Tony Oliva and Bert Blyleven.

Holidays were a special time when she hosted all seven children and their families at 1408 North 4th Street for a couple days. Oven-baked turkeys, homemade dressing, apple bars and cinnamon rolls were among her delicacies.

Helen’s faith was incredible and she lived a genuine Christian life. She attended daily church services, applied messages learned to every-day living, prayed for others, set up the St. Catherine’s Chapel so others would have quality faith experiences and watched Channel EWTN on television.

The family is grateful for the fine care provided by Bethany on University Caregivers and Ethos Hospice.

Memorials can be given to St. John’s Church or Chahinkapa Zoo.

We invite you to Helen’s visitation on Friday, January 28, 2022, from 4:00 PM to 6:00 PM, followed by a prayer service and rosary at 6:00 PM at Vertin-Munson Funeral Home in Wahpeton, ND.  Her visitation will continue on Saturday, January 29, 2022, from 1:30 PM to 2:30 PM, followed by her Mass of Christian Burial at 2:30 PM at St. John’s Catholic Church in Wahpeton, with FR. Dale Lagodinski officiating.  Burial will be held at a later date at Calvary Cemetery, Wahpeton.  A live stream of her services will be available on her obituary page on the funeral home’s website.  Arrangements are entrusted to Vertin-Munson Funeral Home. Helen's Memorial Folder
To order memorial trees or send flowers to the family in memory of Helen Beyer, please visit our flower store.