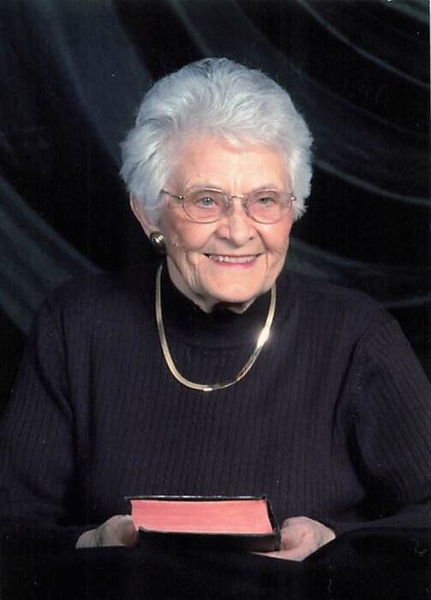 Irva Sederstrom, 97, of Breckenridge, MN, formerly of Hopkins, MN, passed away on Monday, December 21, 2020 at CHI St. Francis Hospital in Breckenridge.  A private Celebration of Life will be held on Monday, December 28, 2020 at 10:30 AM at Vertin-Munson Funeral Home in Wahpeton, ND.  A live stream of her service will be available on the funeral home's website.  A service will be held at Gethsemane Lutheran Church in Hopkins at a later date.  Arrangements are entrusted to Vertin-Munson Funeral Home.

Irva Thurn was born to August and Carolina (Kempf) Thurn on May 13th, 1923 in Ashley, ND. After graduating high school in 1941, she attended the Calhoun Business College in Minneapolis, MN. Irva often joked about “being picked up in the header” as her independence grew and drew her out of Ashley.  She went to work in Steele, ND, where she met her husband, Ken Sederstrom.  They were married on October 4, 1944.

The couple lived in several places before they settled in Hopkins, MN. After years of being a homemaker and watching over her two children, David Paul and Marcia Lee, she began working for Prudential Insurance Company.  She loved her job and stayed until retirement. Irva had come to know loss too well when she lost her son David in 1957 and her husband Ken at the age of 45 in 1968.

Irva was a faithful and devoted member of the Gethsemane Lutheran Church where she met many of her friends and volunteered her time. She quite enjoyed quilting, knitting, bridge, cooking, crafts, traveling, and helping others. In 2012, she moved to the Twin Town Villa in Breckenridge, MN, to be closer to Marcia.

She was also preceded in death by her parents, and her brother, Wilburt Thurn.

In lieu of flowers the family requests donations be made to the NDSCS Foundation or Twin Town Villa.

Irva’s family would like to thank the staff at Twin Town Villa for the wonderful care she has received over the years.

Irva's Memorial Folder
To order memorial trees or send flowers to the family in memory of Irva Sederstrom, please visit our flower store.