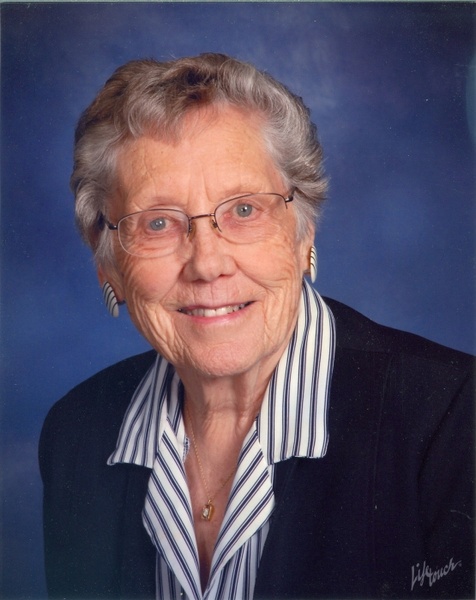 Helen J. Rockne, age 100, of Breckenridge, MN, formerly of Hazen, ND, passed away Monday, July 27, 2020, at Essentia Health in Fargo, ND. Visitation will be held at English Lutheran Church in Hazen on Friday, July 31, 2020, from 10 AM to 11 AM, followed by her 11 AM memorial service. Masks are required at the church.  Pastor Bill Wagner will officiate the service.  In lieu of flowers, the family prefers memorials sent to English Lutheran Church in Hazen, ND. Arrangements have been entrusted to Vertin-Munson Funeral Home.

Helen Jean Pridt was born April 12, 1920, in Billings, MT, to Matthew and Mabel Pridt of Temvik, ND. In 1921, the family moved to Hazen, where Jean graduated from Hazen High School in 1937. She continued her education at the North Dakota State College of Agriculture (NDSU) graduating in 1941. She taught in the Hazen Public Schools until she was united in marriage to Lloyd Rockne at Ft. Lewis, WA, in October of 1943.

Jean worked for several organizations in Hazen, including the Hazen Clinic, Hazen Public Schools, West River Telecommunications, and the North Dakota Department of Public Instruction in Bismarck, until her retirement in 1983.

After retiring, Jean enjoyed spending winters in AZ and summers in Hazen. She was a member of English Lutheran Church and active in Sakakawea Medical Center volunteers’ program.

Jean lived in Hazen until August of 2014, when she moved to Wahpeton, ND, to live near her son and daughter-in-law, Michael and Karen. In 2017, she moved to Twin Town Villa in Breckenridge, MN.

She is survived by her son, Michael (Karen) Rockne; granddaughters, Mari Lynn (Greg) Crowley, of Bloomington, MN, Kristin (Kenton) Pauls, of Fayetteville, AR, and Laura (Matthew) Holmquist of Fergus Falls, MN; 15, great-grandchildren; 6, nieces and nephews; and many other loving family members and friends.

Jean was preceded in death by her parents, Matthew and Mabel Pridt, and her sister, Lillian Pridt-Stroup.

To order memorial trees or send flowers to the family in memory of Jean Rockne, please visit our flower store.