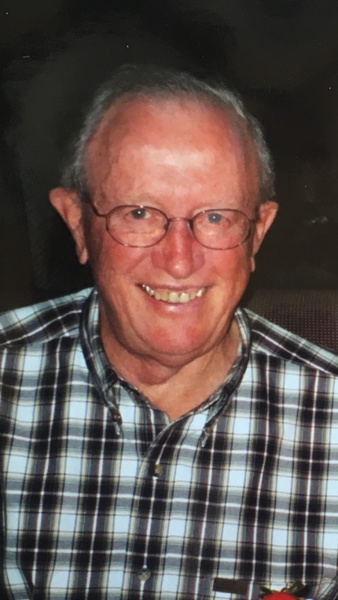 Jerome “Jerry” Hipp, 96, passed away on Thursday, August 2, 2018, at his home in Breckenridge, MN, where a wonderful team of caregivers provided care for him and his wife Mary for over two years. A Funeral Mass, honoring Jerry and his wife, Mary, who passed away on July 17, 2018, will be held at 10:30 a.m. Monday, August 13, 2018 at St. John’s Catholic Church, Wahpeton, ND. Visitation will be one hour prior to the service at the church.

Jerome Paul Hipp was born on September 12, 1921 in Hankinson, ND to Adam and Elizabeth Hipp, where he grew up with 9 other siblings. As a small boy he was kept busy with chores, since his family raised cows, pigs, and chickens.

One year Jerry was a clerk and delivery boy at the grocery store. He worked there after school and all day Saturday for $4.50 a week. Summer came and he worked about two weeks at the grocery while his buddies were working at a nursery 2-1/2 miles west of town. A young boy would rather be outside working with his friends, so he quit the grocery store job and went to work at the nursery. A truck would pick the boys up at 6:30 a.m. and return them home again after 6 p.m. He pulled and hoed weeds and picked plums and apples for 5 cents an hour, 10 hours a day. True, the nursery job paid less, but he enjoyed it more.

Jerry attended first and second grade at Hankinson Public School and the rest of the grades and high school at St. Francis Academy. He graduated in 1939 and went to work on a farm and later for a lumber company.

As the clouds of war gathered, President Roosevelt began calling for young men to volunteer for the service. In February 1941, Jerry joined the National Guard in Wahpeton, which was federalized by the United States Army.  He was training at Camp Claiborne, LA when Pearl Harbor was attacked. In March of 1942 Jerry headed overseas, landing at Melbourne, Australia, before moving on to New Caledonia for additional military training.

On October 13, 1942, Jerry landed on Guadalcanal, part of the 164th Battalion, the first Army unit to take the offensive in the Pacific. He fought there until March 1943 before moving on to the Fiji Islands where they regrouped with reinforcements. In November it was off to Bougainville, the largest of the Solomon Islands, for combat. Then Leyte, Mindanao, Panay, Bohol and Cebu, all in the Philippines - all more combat.

In July of 1945, Jerry started back home. His ship was six days out of Pearl Harbor when the first atomic bomb was dropped. By the time they arrived at Pearl Harbor, the United States Navy ships were flying the victory flag. The war was over and in August 1945, Tech Sargeant Jerome Hipp was discharged from the army.

Heading home to Hankinson, the train arrived around midnight and Jerry walked to his mother’s home and knocked on the door. She was awakened and came to the door, saw him and said, “Ach, Jerry, it’s only you.” She shut the door and left him standing outside, while she went for her robe. His mother hadn’t seen her youngest son for almost five years and went to put on her robe first before letting him in. The family has laughed and teased over this incident many, many times.

Jerry immediately busied himself working with a construction crew installing electric lines into farms in South Dakota. In November 1945, he went into partnership with his older brother, John, and purchased a liquor business in Hankinson. A few years later he bought his brother’s interest and moved the business into an old hatchery building, which he remodeled. The new name was Jerry’s Bar. He later relocated the business to Main Street.

After his return from the war, he was introduced to Mary Zander, a friend of his younger sister. He courted Mary for about a year and on October 9, 1946 they were married.

In 1969 he sold Jerry’s Bar and moved to Alexandria, MN for a year, and then to Breckenridge, MN, where he owned a wholesale beer distributorship in Wahpeton, ND and later an off sale liquor business in Breckenridge. Both were sold and in 1983 Jerry retired. Over nearly 40 years he made his living in a bar, a beer distributorship, and a liquor store. Yet his advice to his children - “Stay out of the liquor business.”

He enjoyed fishing, golfing and woodworking in his retirement years. Jerry and Mary enjoyed annual winter trips to Arizona along with other travels.

He maintained a membership at the Bois de Sioux Country Club for years. Together with two or three friends he enjoyed golfing the back nine. Bad shots were called “poop shots”, but they never stopped the fellas from golfing “par” (since they either never kept score or only counted strokes once they were on the green).

Jerry was the eternal optimist.  His response to illness, unfortunate circumstances or tough times was always the same - “It’ll get better!” And it always did.

He was preceded in death by his parents and all nine of his siblings, Mary, his wife of 71 years, their first child, Paula Marie, and a grandson, Samuel Sturges.

As his health waned in the last few years and his trips to the ER were becoming more frequent, his wife, Mary, thinking that perhaps he might go first, would say, “Jerry, I don’t know what I would do without you.”  Being the faithful husband that he was, he waited until Mary passed on July 17, 2018, before joining her 16 days later. Although it is sad for family and friends to have him leave, he’s undoubtedly thrilled to now be able to join Mary in a round of golf, or to challenge her to a game of Pinochle, or to just look at her and smile. Jerome's Memorial Folder
To order memorial trees or send flowers to the family in memory of Jerome Hipp, please visit our flower store.