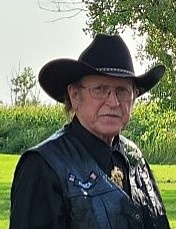 Jerome “Jerry” Hills, 73, of Wahpeton, ND, passed away on Friday, November 5, 2021 at Sanford Health in Fargo, ND.  Visitation will be held on Wednesday, November 10, 2021 from 6:00 pm to 7:00 pm, followed by a prayer service at 7:00 pm at Vertin-Munson Funeral Home in Wahpeton.  Visitation will continue on Thursday, November 11, 2021 at St. John’s Catholic Church from 10:00 am to 11:00 am, followed by his Mass of Christian Burial at 11:00 am, with Fr. Dale Lagodinski officiating.  Jerry’s family asks that you please wear a mask if you plan to attend his services. A live stream of his services will be available on the funeral home’s website.  Arrangements have been entrusted to Vertin-Munson Funeral Home.

Jerome Joseph Hills was born on May 23, 1948, to Herman and Evelyn (Ness) Hills in Wheaton, MN.  He grew up and attended school in White Rock, SD, and later attended welding school for a short while.  During his younger years, Jerry enjoyed participating in demolition derbys at the Wilkin County Fair with his good friend, Phil Widhalm.

On February 4, 1967, Jerry was united in marriage to Jeannie Matheson at St. John’s Catholic Church in Wahpeton, ND.  The couple made their home in Wahpeton where they raised their family and enjoyed taking many family vacations to the Black Hills, Itasca State Park, and Graceland in Memphis, Tennessee.  Jerry drove truck for many different companies throughout his life and made many friends that he continued to stay in touch with at truck stops along the way.  He was inducted into the Trucking Hall of Fame and was a member of the Million Mile Club.  He also worked at Wil-Rich for over 25 years and even owned his own auto body shop for a short while.

Jerry was a talker and wanted to visit with anyone that he could, always sharing the details of any project that he was working on.  He was always willing to lend a hand to anyone even if it meant traveling many miles on his own expense.  Jerry was a self-taught mechanic.  He enjoyed working on cars and he even built two 3-wheelers with Volkswagon engines from the ground up.  He also kept himself busy with house projects and woodworking, making many different items for his family and friends.  What he loved the most, however, was his family; especially the time spent teasing his grandchildren.

He was preceded in death by his parents, Herman and Evelyn Hills; an infant son, Randy Hills; his siblings, Barbara Hills, Roger Herberg, Jan (Merle) Gebro, and Marvin Hills; and his brother and sister-in-law, Jim Lewis and Kathy Hills.