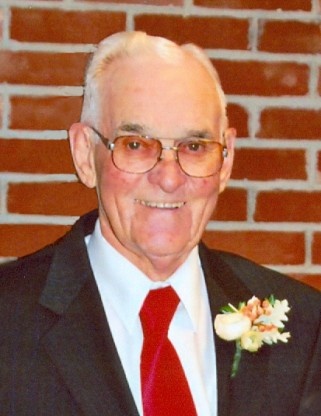 John “Jack” Kaiser, 88, of Fairmount, ND, passed away peacefully surrounded by his family on Sunday, December 16, 2018 at CHI St. Francis Healthcare in Breckenridge, MN.  Visitation will be held from 5:00 pm to 7:00 pm, followed by a prayer service at 7:00 pm on Thursday, December 20, 2018 at Vertin-Munson Funeral Home in Wahpeton, ND.  Visitation will continue on Friday, December 21, 2018 from 9:30 am to 10:30 am, followed by the funeral mass at 10:30 am at St. Anthony’s Catholic Church, Fairmount, with FR. Scott Sautner officiating.  Interment will be at Calvary Cemetery, Fairmount.  Arrangements have been entrusted to Vertin-Munson Funeral Home, Wahpeton.

Jack was born at home, south of Fairmount, on February 24, 1930 to John C. and Margaret (Mulloy) Kaiser.  He grew up south of Fairmount and graduated from Fairmount High School in 1948.  After graduation, Jack helped out with the potato harvest near Drayton, ND, and then came back to work on the family farm when his two older brothers went into the U.S. Army.  He also drove Fairmount’s School bus for several years.

Jack was united in marriage to Corrine Wettstein on May 7, 1955 at St. Anthony’s Catholic Church in Fairmount.  They farmed in rural Fairmount until Jack was unable to continue because of health issues.

Jack was a member of St. Anthony’s Catholic Church and Knights of Columbus.  He enjoyed hunting and fishing with his sons and grandsons.  Some of the other hobbies that he enjoyed included playing pinochle with his friends and league bowling.  Jack loved when his grandchildren and great-grandchildren came to visit.  He enjoyed rocking the little ones for as long as they would stay on his lap; they had a way of lifting his spirits.  Jack’s passion for life was farming.

In lieu of flowers, memorials are preferred to CHI Health at Home Hospice.