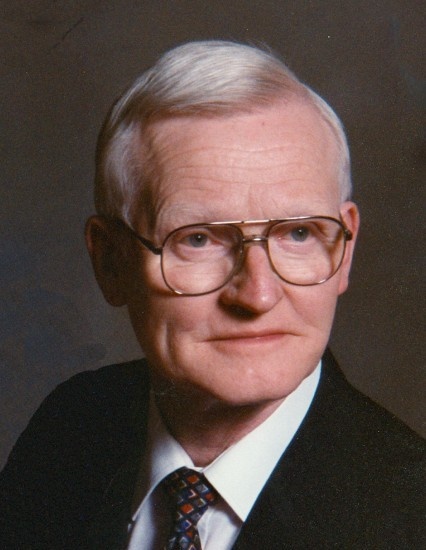 David Tolo, 90, of Wahpeton, ND passed away on Tuesday, June 19, 2018.  Visitation will be held on Wednesday, June 27, 2018 from 10:00 am to 11:00 am, followed by a celebration of life at 11:00 am at Bethel Lutheran Church, Wahpeton, with Rev. Erika Buller officiating.  Arrangements are entrusted to Vertin-Munson Funeral Home, Wahpeton.

David Tolo was born on August 4, 1927 to G. Walther and Hilma (Mickelson) Tolo in Fertile, MN.  He grew up in Fertile and graduated from Fertile High School in 1945.  After high school, he joined the Navy at the age of 17.  After being honorably discharged, David attended Luther College in Decorah, IA.

David was married by his father to Mary Jane Ness on December 30, 1949 in Fertile.  The couple moved to Wahpeton, ND in 1952 where they raised their four children.  David worked for Globe Gazette Printing in Wahpeton as a paper ruler for over 40 years, retiring in 1993.

David was a man of dignity and dedication.  He was a husband, father, grandfather, father-in-law, brother, friend, veteran, Norwegian, chauffeur, family comedian, and Vikings fan; he carried all of his titles with honor and pride.

David was a Minnesota Vikings and Twins fan, win or lose, and was very patriotic, collecting numerous flags throughout the years.  He enjoyed listening to music, especially bluegrass, country, and gospel.  David loved painting; he would paint and repaint the same object multiple times, and would also put stickers on anything he could.  He had a very quick wit.  After watching a TV commercial that said “the more you buy, the more you save,” he responded, “think of how much you would save if you didn’t buy anything.”

David was a very involved member at Bethel Lutheran Church.  He was a member of the choir for 52 years, the financial secretary for 37 years, served on the church council, and did many other tasks to keep the church looking nice.

He was preceded in death by his parents, G. Walther and Hilma Tolo; two brothers, Rev. Paul Tolo and Norman Tolo; and sister, Ruth Siegle. David's Memorial Folder
To order memorial trees or send flowers to the family in memory of John Tolo, please visit our flower store.