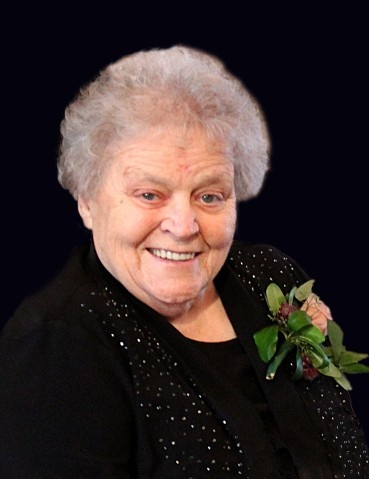 LaRue peacefully passed away at Lilac Homes, Moorhead, MN on Thursday January 28, 2021 after suffering a stroke the week before.  Last year after testing positive for COVID-19, we were called in to say our goodbyes two days before Mother’s Day.  The staff was worried that she would succumb to the virus, yet LaRue proved us all wrong when she kicked COVID to the curb.

Visitation will be Sunday, January 31, from 2-4 pm, with a prayer service at 4pm at Vertin-Munson Funeral Home, Wahpeton, ND.  Funeral services will be Monday, February 1, 11am at Bethany Free Lutheran Church in Rural Abercrombie, ND with Reverend Thomas Reagan officiating.  Burial will be at Bethany Free Lutheran Cemetery.  A live stream of her prayer service and funeral service will be available on the funeral home’s website.  Arrangements have been entrusted with Vertin-Monson Funeral Home, Wahpeton.

LaRue was born in Fargo on September 28, 1939 to Elmer and Vivian (Poehls) Bakke and grew up on the family farm in Hickson, ND.  She graduated from Fargo Central High School in 1957.

She worked at Northwestern Bell, Fargo; Aber Telephone, Abercrombie; and Richland School District, Colfax, where she retired after working as the Business manager there for 32 years and substitute cook.

While skating in Wolverton, LaRue met her husband of 56 years, Steiner Flaa.  They were married June 17, 1961 at Hickson Lutheran Church.  Together they had 3 children. Stenny and LaRue were the Luther League advisors for several years at Bethany Free Lutheran Church.

They loved snowmobiling and camping with their kids, family, and friends.  Stenny and LaRue were original stockholders of Minn-Dak Farmers Cooperative, Wahpeton.  LaRue loved farming along side of Stenny.  She also had many special gifts as she sewed for people in the community, including family and friends.  Baking was another one of her many talents.  Often times there were three different kinds of cookies, fresh baked bread, rolls, bars, and pies that filled the counters of their house all at the same time.  She would also bake many items for families and bachelors in the community.  LaRue also spent many years coaching her favorite sport of softball.

Her greatest joy was watching her kids and grandchildren grow up and attend all of their activities.  Along the way, she became a second “mom” and “grandma” to countless kids from all the schools her grandchildren attended – loving them all as if they were her own.  She had two special bragging rights, the first of which was watching from the stands and cheering on her son Mike as he high jumped in both high school and college.  The second being she not only coached her daughters playing softball, but all three of them got to play on the same team - LaRue pitching, Nancy playing 3rd base and Jody playing 1st base.

We would like to thank the staff of Lilac Homes, Moorhead for not only taking care of our mom and grandma, but also for loving her.  She loved you all so much, we are incredibly grateful for everything.

To order memorial trees or send flowers to the family in memory of LaRue Flaa, please visit our flower store.