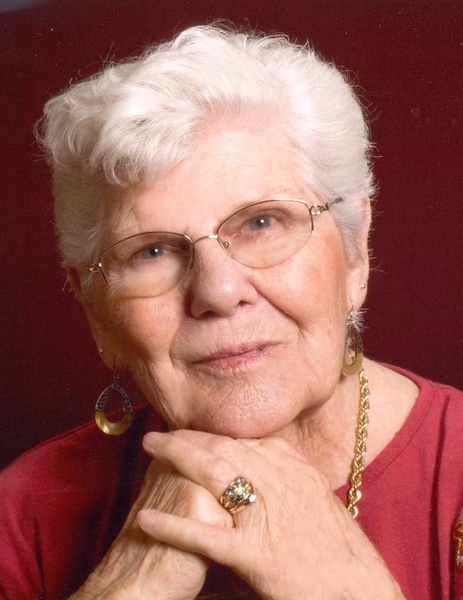 Leona M. Johnson, 92, of Wahpeton, ND, passed away on Sunday, March 31, 2019, at Bethany Retirement Living, Fargo, ND. Visitation will be held on Sunday, April 7, from 3pm – 5pm, with a Prayer Service at 5pm at Vertin-Munson Funeral Home, Wahpeton, ND. Funeral Mass will be held on Monday April 8, at 11am with a Christian Mother’s Rosary at 10am at St. John’s Catholic Church in Wahpeton, with Father Dale Lagodinski officiating. Arrangements have been entrusted to Vertin-Munson Funeral Home, Wahpeton.

Leona Margaret Johnson was born on March 8, 1927, in Wahpeton, ND to Joseph J. and Mary (Steffen) Randall. She attended St. John’s School and graduated from Wahpeton High School in 1944. On June 30, 1945, she married Barron Johnson at St. John’s Catholic Church in Wahpeton. The couple farmed in Wahpeton where they raised their 8 children. Barron and Leona enjoyed square dancing and their neighborhood card club. They also spent their retirement traveling in their 5th wheel camper. Barron passed away on November 28, 1989, and Leona continued to live on the family farm until 1991. She then began spending winter months in Lake Havasu, Arizona and summered at the couple’s lake home on Swan Lake, near Fergus Falls, MN. Leona considered Swan Lake a “little slice of heaven” and enjoyed watching the hummingbirds at the bird feeders. She often said, “it doesn’t hurt to ask”, and “don’t be sad you’re leaving, be happy that you were here”.

Leona enjoyed playing cards, Skip-Bo, Scrabble and board games of all kinds, and passed this enthusiasm onto her children.  She was an accomplished seamstress and a fantastic cook. Being a mother meant everything to Leona and having 8 children was the joy of her life.

Leona was a life long member of St. John’s Catholic Church, Christian Mothers, past chairman of the Family Life Committee at St. John’s, VFW Auxiliary and a long-time member of the Richland County Homemakers.

Leona was preceded in death by her parents Joseph and Mary Randall, her husband Barron Johnson, her son James B. Johnson, brothers, John, Tony, and Jerry Randall and sisters, Francis LaFoone, Marcella Minar and Caroline Reyelts.

In lieu of flowers, please send your donations to St. John’s School or the Carmel of Mary Monastery, both located in Wahpeton.

Burial will be on May 25th at 2:00pm at Calvary Cemetery in Wahpeton. Leona's Memorial Folder
To order memorial trees or send flowers to the family in memory of Leona Johnson, please visit our flower store.