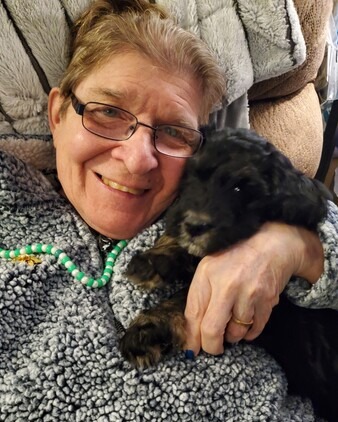 Leona was born on January 19th, 1946, in Valley City ND, the daughter of Frank and Esther Puhr.

Leona moved to Grafton to receive services in 1952, at age 6.  She lived there until moving to Grand Forks, ND in 1972 and in December of 1973, she had a son Brian, who she loved and talked of often.  In 1975 she moved to Fargo ND, where she married the love of her life, Paul Umphrey on July 6th, 1976.  She and Paul lived their life together in Fargo until he became ill and passed away in 1999.  Leona then moved to Wahpeton ND, in 1999 and received serviced thru Red River Human Services Foundation for the remainder of her life.  Guardianship and advocacy service were provided by Catholic Charities of North Dakota and Southeast Human Services Foundation.

Leona took pride in her work.  Throughout the years she worked at various restaurants and loved to tell people about her adventures in making chips at Mexican Village.  She also worked at Thrifty Horizons, in Breckenridge, where she cleaned, tagged clothes and put merchandise out on the sales floor.

Leona was a kindhearted hearted woman and strong in her faith.  She met many friends along the way and would greet everyone with an enthusiastic two-handed wave and made sure to let them know “I like you”.  She was proud of her faith and spoke of God and Jesus, as being “a wonderful man”.  She took pride in her collection of religious statues, rosaries and photos, which brought her much comfort.  She loved singing her own special version of “Jesus Loves Me” to anyone that had the time to listen.

She often spoke with sadness of all her loved ones that passed before her and missed them dearly.  All that have known Leona, take great comfort in knowing she is at peace with the Lord and had a joyous reunion with her husband Paul and son Brian, as well as her parents Frank and Esther Puhr, brother Leonard Puhr, sister Lorraine Tjon and other friends that preceded her in death.

She is survived by her brothers August “Auggie” Puhr of Fargo, ND and Francis Gerzewski last known of West Fargo, ND.

Fly high and dance sweet Leona, you will surely be missed!

Obituary submitted by the loving staff that cared for her.

To order memorial trees or send flowers to the family in memory of Leona Umphrey, please visit our flower store.

Rosary will begin at this time as well.