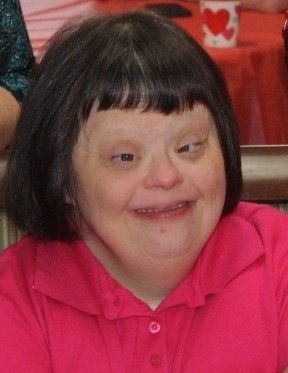 Lesley Kay Gunness passed away on Sunday, November 18th, 2018 at Eventide Living in Fargo. Services will be on Friday, November 23rd at Eventide Fargo at 3:30 pm with Jeff Brown officiating. Time for sharing will follow the service. Arrangements are entrusted to Vertin Munson Funeral Home.

Lesley Kay Gunness was born on February 16, 1967, to John A. Gunness and M. Ione (Adams) Gunness in Fargo, ND.  She was baptized at Emmanuel Lutheran Church in Abercrombie, ND, and was confirmed at Olivet Lutheran Church in Fargo.  Lesley lived in Abercrombie until 1972 when she and her mother moved to Fargo after the death of her father.  Lesley attended the Opportunity School and then enrolled in the Fargo school system, graduating from Fargo South High School in 1986.  After graduation, Lesley worked at the Evaluation and Training Center in Fargo for many years.  In 2011, she and her mother moved to the Good Samaritan Center in Arthur, ND.  After Ione’s death in 2012, Lesley continued to live in Arthur until 2017 when she moved to Eventide Fargo.  Lesley and Ione spent many happy summer weekends at their cabin on Crane Lake, MN.

Family was especially important to Lesley and her happiest times were family get-togethers.  Her 50th birthday party in 2017 was a highlight in her life.  Friends and family, many who travelled from the West Coast, joined her in celebrating.  Lots of smiles and hugs were exchanged that day!  Lesley enjoyed watching her favorite tv comedy shows and WWF wrestling.  Wendy’s hamburgers and Diet Coke were tops on her list of favorite foods.  She enjoyed listening to her favorite country music stars and the Gaither’s gospel quartet.  Lesley was also a very good Bingo player and never missed a game when she lived at Good Samaritan.  She cheered up everyone’s day with a smile, a compliment or a hug.

Lesley was preceded in death by her mother, father, brother James Brian, and grandparents Ole and Mathea Gunness and Ralph Adams and Laura Adams Hetland.

Lesley’s family gives special thanks to the staff at Eventide Fargo and Ethos Hospice for their loving care and support. Lesley's Memorial Folder
To order memorial trees or send flowers to the family in memory of Lesley Gunness, please visit our flower store.