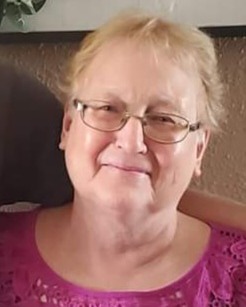 Loretta Bernstein, 68, of Wahpeton, ND, passed away Sunday, December 25, 2022, at Sanford Medical Center on Broadway.  Her memorial service will be held at Vertin Munson Funeral Home, Wahpeton, ND, on Wednesday, January 4, 2023, at 11a.m. with visitation one hour prior.  Father Paul Kuhn will officiate.

Loretta Jo Klinkhammer was born on November 15, 1954, to James and Adeline (Milbrandt) Klinkhammer in Oakes, North Dakota.  She attended school in Gwinner, ND. Loretta met Richard Bernstein in Cogswell, ND, and after a five-year courtship, they were married.  After marriage, Loretta and Richard moved to North St. Paul, MN, where Loretta finished her senior year graduating from North St. Paul High School in 1973.

Loretta’s husband Richard joined the military in 1975. His military career brought them to Germany where he was stationed for 3 years. This is where they began their family, first welcoming their daughter Laura in 1977 and then their son Robert in 1978.  After leaving Germany they spent 3 years in Colorado before making their home in Wahpeton, North Dakota.

Loretta worked as a CNA, retiring in 2014.  She was a CNA for over 32 years.  Loretta loved taking care of people, whether it be at her job, or her friends and neighbors.

Loretta was most known for her kind heart and treated everyone as they were a part of her family. She was a bonus mom and grandma to many of Laura and Roberts friends and her grandchildren’s friends as well. Loretta’s fridge was always stocked with Powerade and treats for her grandkids and their friends!

Loretta loved her five grandchildren, and was present for almost every one of their events.  She had a knack for yelling at the umpires during baseball games, but knew she had to be quiet at tennis matches.

When Loretta wasn’t at her grandchildren’s events or visiting with her neighbors and friends in their shop out back, you would find her curled up in a blanket reading a book or watching a good Western or the Hallmark channel on TV.

In lieu of flowers, donations can be made to the American Cancer Society.

Livestreaming will be available for this event.