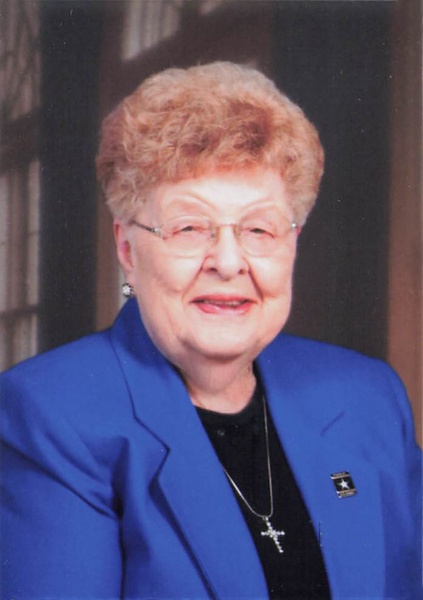 Lorraine Wieser, 96, of Wahpeton, ND, ended life on earth the way she often spent it, with a rosary in her hands on Saturday, January 22, 2022, at Twin Town Villa in Breckenridge, MN, under the care of CHI Health at Home Hospice. Visitation will be held on Friday, January 28, 2022, from 5 PM to 7 PM with a rosary beginning at 6:45 PM followed by her prayer service at 7 PM, at St. John's Catholic Church in Wahpeton. Visitation will continue at the church on Saturday, January 29, 2022, from 10 AM to 11 AM, followed by her funeral mass at 11 AM. Fr. Dale Lagodinski, Fr. Stan Wieser and Fr. Frank Miller will officiate the services. Burial will be held at a later date in Calvary Cemetery, Wahpeton. In lieu of flowers, donations can be made to the Carmel of Mary Monastery at 17765 78th SE, Wahpeton, ND, 58075, in honor of Lorraine. Arrangements have been entrusted to Vertin-Munson Funeral Home.

Lorraine Marie Kaus was the first of six children born to William and Elizabeth (Braun) Kraus on March 9, 1925, in Rosholt, SD. After graduating from Rosholt High School in 1943, she went on to finish teachers’ college in Aberdeen, SD. She taught at a country school near Rosholt for the next four years, getting a ride in with her father in the winter so that he could help start the fire to warm the schoolhouse. In warmer months, she walked a couple of miles to get to work. She made a long-lasting impression on her students and received greetings from some as recently as her 95th birthday celebration.

When she wasn’t teaching students, she was writing letters to a neighbor she had been dating, Raymond Wieser, while he was deployed to Europe for World War II. Once he returned home after serving three years overseas, they married on June 5, 1946, and settled in Rosholt to start their family. By the time they purchased a home and farm along the Bois de Sioux near Wahpeton 11 years later, they had five children – Theodore, Susan, Hubert, Timothy, and Christopher – and soon added one more, Randall “Rosco”, to complete their family.

Lorraine stayed busy as a housewife and mother as they milked dairy cattle and grew crops. She loved to lift her voice in song to the Lord and did so as a member of St. John’s Catholic Church for nearly 60 years. She also was a member of Carmel of Mary Monastery and Catholic Daughters. Lorraine loved volunteering at her church and for St. Francis Home in Breckenridge. In all things, she praised the Lord and gave thanks. Even in times of struggle, she remained filled with joy and optimism, trusting in God to carry her through.

She was preceded in death by her husband, Raymond, who passed away in November 1997; her parents; and four siblings, Valeria Schuler, Florine Wellman, Stanley Kraus, and Vern Kraus. Lorraine's Memorial Folder
To order memorial trees or send flowers to the family in memory of Lorraine Wieser, please visit our flower store.