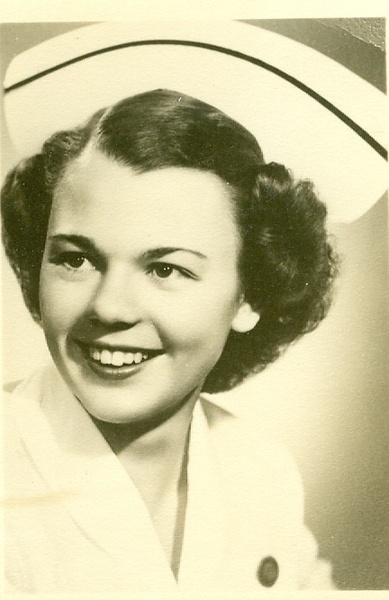 Margaret "Peg" George, 88, Fargo, ND, formerly Wahpeton, passed away Wednesday, May 3, 2017 at Bethany on University, Fargo. The Funeral Service will be 3 PM Saturday, at Evergreen United Methodist Church, Wahpeton. Visitation will be from 1 PM until the time of service at the church. Interment will be at Fairview Memorial Gardens, Wahpeton. Memorials may be sent to Evergreen Methodist Church, Wahpeton, or Bethany Retirement, Fargo. Arrangements have been entrusted with Vertin-Munson Funeral Home, Wahpeton.

Margaret Elizabeth Buechler was born December 11, 1929 in Bismarck, ND. Her Dad, Karl, wanted her to be named for her mother, who was also Margaret, but the family called her Peggy. The family lived in Goodrich, ND where she graduated from high school in 1947, and was her class valedictorian. Following high school, Peg attended St. Alexius School of Nursing in Bismarck, where she graduated as a registered nurse in 1950.

She met Clarence George of Ashley, ND through her cousin Loren Linder. Clarence and Peg were married in June 1951 when Clarence graduated from the NDAC, now NDSU. The Georges moved to Breckenridge, MN later that year. Peg got her first and only job at the (first) St. Francis Hospital, and Clarence went to work for Miller Drug in Wahpeton. In 1952, their first child, Connie was born, followed by Steve in 1953.

The family moved to Fairmount, ND in 1955, where Clarence purchased a drug store, and Peg worked part-time as a private duty nurse. A "party line" between the drug store and home, made the George home into an emergency station, with the telephone being answered "day or night".

Mike was born in 1959 and John followed in 1963. The family returned to Wahpeton in 1965. Later Peg worked at the (second) St. Francis Hospital near the river, first as a part-time and then as a full-time registered nurse, retiring in 2003. Her co-workers were always a big part of her life.

Peg, Clarence and family enjoyed many fine summers at Ottertail Lake near Fergus Falls, MN, and more time after retirement. It truly was a second home for Peg and Clarence, but in 2007, it was time to sell the "lake place". Peg and Clarence moved to the Waterford in Fargo where they lived until 2009 when Clarence died.

Peg was diagnosed with Alzheimer's Disease and spent the next eight years at Bethany Nursing Home on South University Drive in Fargo, where she was treated like a staff member on the memory care unit, due to her nursing background. She was quick to point out that she was still a nurse! The Bethany staff took great care of Peg and made her life much easier, and probably longer. Thank you!

She was preceded in death by her husband Clarence, her parents Karl and Margaret Buechler, and a brother-in-law Robert Ecker.