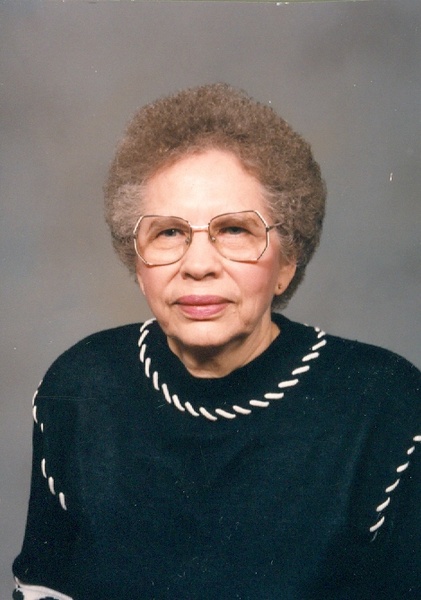 Margaret LuVerne Olson was born November 25, 1919 at Dwight, ND.   She was the oldest daughter born to Arthur and Lillian (Erickson) Olson.  Being the oldest, she lovingly helped take care of her 5 younger siblings: Pearl, Alice, Edwin, Lois and Harlan.

Margaret graduated from Abercrombie High School.  She married Glenn Larson and had two daughters, Julie and Glenda.  Margaret later married Edward Hingst who had six children:  Ward, Dean, Ray, Kathel, Leander and VondaLu.   In 1947 Margaret, Ed, and their large family moved to Great Bend, ND.   While living in Great Bend, two more daughters, Jean and Carrie, were added to the family.   Margaret was active in PTA and started the hot lunch program for the Great Bend School.  She was a 4-H leader, active in Homemakers, and a member of Trinity Lutheran Church.

In September 1962, the family moved to Wahpeton.  Ed passed away in 1980.  Margaret worked at Uncle Jim’s Café in Breckenridge, MN for 20 years, and then at the Leach Home in Wahpeton, retiring at the age of 80.  When Margaret passed away at the age of 98, she was the oldest member of Immanuel Lutheran Church.

Margaret enjoyed traveling and attended many family celebrations.  She liked playing cards, working on crossword puzzles, watching quiz shows, singing, dancing and going to the Eagles on Wednesday nights to play bingo and have dinner with her good friend, Grace Littke.

In January of 2014, Margaret moved to Breckenridge, MN to the St. Francis Nursing Home, Prairie Meadows Neighborhood.  The staff and residents there were very important to Margaret and she was fond of them all.

Margaret lived a long and active life, she was an endearing lady and will be missed. To order memorial trees or send flowers to the family in memory of Margaret Hingst, please visit our flower store.