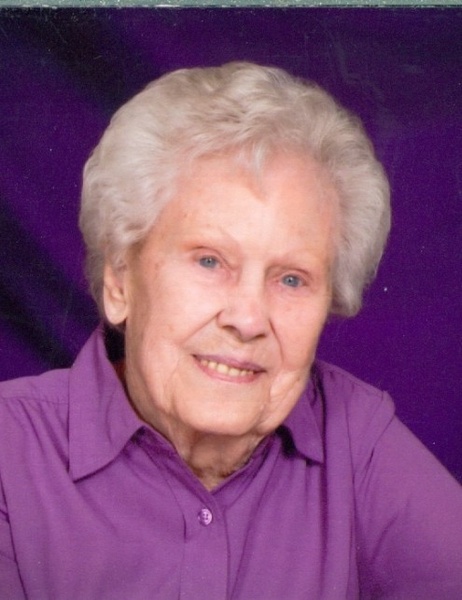 Margie Gagelin, 97, of Wahpeton, ND, passed away on Wednesday, July 31, 2019 at CHI St. Francis Hospital in Breckenridge, MN.  Visitation will be held on Monday, August 5, 2019 from 9:30 AM to 11:00 AM, followed by her funeral service at 11:00 AM at Immanuel Lutheran Church in Wahpeton.  Rev. Matthew Tooman will officiate the service.  Burial will be at Fairview Memorial Gardens, Wahpeton.  Arrangements have been entrusted to Vertin-Munson Funeral Home.

Margie M Gagelin was born October 31, 1921 in Sargent County, North Dakota, the daughter of Erik and Martha Johnson Moen. She was number 8 of 9 children. She grew up on the family farm south of DeLamere, North Dakota, and attended the rural Immanuel Lutheran Church, where she was baptized and confirmed.

Margie attended rural school through the eighth grade. She helped her mother with mid-wife duties and later worked for other families nearby. Margie’s first “real job” was working in Buddy Berg’s cafe in Barney, North Dakota, where she met Martin Gagelin. They were married on April 10, 1944. While Martin was in the Navy, Margie continued working in the restaurant, baking lots and lots of pies.

They lived in Barney where Martin worked with his father and brothers at Gagelin Blacksmithing. In 1956, Martin and Margie moved with their four daughters to Wahpeton. While living in Wahpeton, another daughter and a son were added to the family. She was known to be a hard worker and raising a family of six children kept her busy.

Margie had many things she liked to do: coffee with the neighbor ladies, laundry and cleaning, bowling, working with her flowers, feeding the birds in her yard, playing with the grandkids, playing cards and dancing and dancing (polka was her favorite). Her all-time favorite thing was spending time with her very large family.  She was a member of Immanuel Lutheran Church in Wahpeton and the Barney and Wahpeton VFW Auxiliaries.

Margie was preceded in death by her husband, Martin, son Jeffery, granddaughters, Elise and Jacy, her parents and 7 sisters and 1 brother. Margie's Memorial Folder
To order memorial trees or send flowers to the family in memory of Margie Gagelin, please visit our flower store.