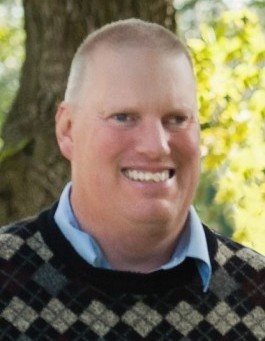 It is with great sadness that the family of Mark Ronald Olthoff announces his passing on September 4, 2019.

Mark was born on June 8, 1966, to Ronald and Lucille (Beste) Olthoff of Christine, ND.  In 1986, he graduated from Valley City High School, Valley City, ND, and eventually moved to Wahpeton, ND, where he greatly enjoyed working with his brothers.

Everyone that knew Mark would surely acknowledge that he was the kindest, most gentle soul they knew.  Mark’s goal each day was simple: treat his friends, as well as strangers, with kindness and respect, make as many new friends as he could, and try to help anyone who needed it.

His great passion for playing golf is widely known among his many friends.  Mark approached the game in the same manner with which he approached life: with endless enthusiasm and his always-present smile.  He loved to wear his traditional golf knickers when he played because of all the smiles and compliments he received.

Mark was preceded in death by his parents, Ronald and Lucille, as well as his cherished brother-in-law, Dale Christopherson.

There will be a private family service held at a later date.  Blessed will be the memory of our brother Mark.

To order memorial trees or send flowers to the family in memory of Mark Olthoff, please visit our flower store.