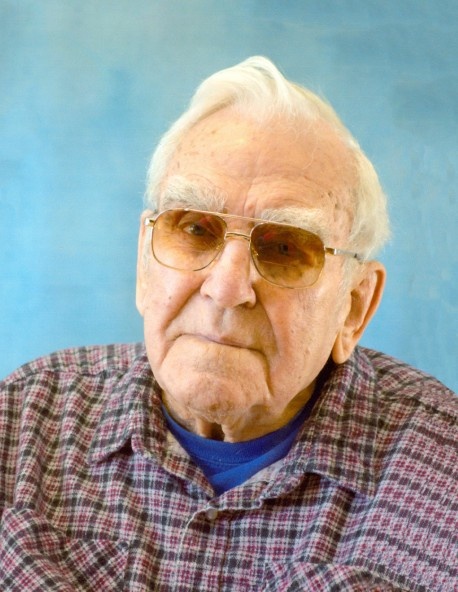 Marvin Larson, of Mooreton, ND, passed away on Sunday, June 16, 2019 at CHI St. Francis Nursing Home in Breckenridge, MN.  Visitation will be held on Tuesday, June 18, 2019 from 5:00 pm to 7:00 pm with a prayer service at 7:00 pm at Peace Lutheran Church in Barney. Visitation will continue on Wednesday, June 19, 2019 from 9:30 am to 10:30 am followed by the funeral service at 10:30 am at the church. Pastor Sean Daenzer will officiate. Burial will be in Peace Lutheran Cemetery, Barney.  Arrangements have been entrusted to Vertin-Munson Funeral Home.

Marvin Larson, the oldest child of John and Thilda (Haugly) Larson, was born on December 1, 1927 at Fairfax, MN.  He was baptized and confirmed at Our Savior’s Lutheran Church, and he attended school in Fairfax through the 8th grade.  Marvin’s family moved to Danton Township, ND, in 1949.  On February 23, 1951, Marvin joined the Marines and due to a previous farm accident, he was honorably discharged on March 23, 1951.  He worked at Boeing in Washington and also in the oil field at Tioga, ND.

On December 9, 1955 he married Luann Mindeman, the daughter of Arthur and Alice Mindeman, at Peace Lutheran Church in Barney, ND.  The couple lived in Cokato, MN for a short while before moving to Barney in 1957.  Marvin worked for Floyd Hammond at Schuler’s Elevator before working at Melroe in Gwinner, ND, shortly before a major lay-off.  In 1958 they moved to Milnor, ND and he was hired as a lineman at RSR Electric Co-op, now Dakota Valley Electric, where he worked for 31 years, with the last 10 years as a line foreman.  Marvin was a 60 year member of the Smith-Thune American Legion, 40 & 8, an honorary member of the Milnor Volunteer Fire Department, a former member of the Eagles, and a former member of the Cogswell Gun Club.

In December of 1994, they moved onto Luann’s home farmstead near Mooreton, ND, in Barney Township.  Marvin was a member of Peace Lutheran Church in Barney.  During his retirement, he worked as a volunteer on the Bagg Bonanza Farm restoration.  He enjoyed hunting, camping, playing cards, and spending time with his family, especially his grandchildren and great-grandchildren.  He entered Twin Town Villa Memory Care on December 6, 2018.  On February 8, 2019, Marvin moved to St. Francis Nursing Home. Marvin's Memorial Folder
To order memorial trees or send flowers to the family in memory of Marvin Larson, please visit our flower store.