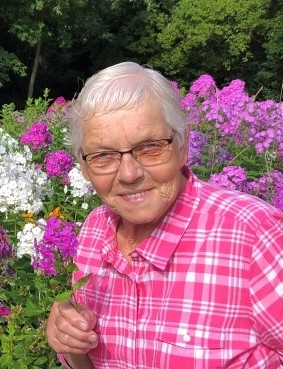 Mary June Nash, 88, rural Colfax, ND, went home to be with Jesus on Wednesday, August 25, 2021, at Essentia Health in Fargo, ND, surrounded by her children.  Visitation will be held on Saturday, October 16, 2021, from 10:00 AM to 11:00 AM, followed by a Celebration of Life Service at 11:00 AM at Bethany Free Lutheran Church, rural Abercrombie, ND.  A time for lunch and fellowship will follow her service at the church.  A live stream of the service will be available on the church’s website, bethanyfreelutheran.com.

Mary (Faust) was born on June 25th, 1933, to Marcus and Dagne Faust on a small farm outside of Valley City ND.  Mary attended school in a small, rural schoolhouse with her 8 other siblings and later boarded with various families in Valley City to attend Valley City College High School while working various jobs until graduation in 1951.

Mary met Kenneth Nash at a Luther League event and were married shortly thereafter on September 6, 1952.  Mary and Ken made their lifelong home near Colfax, ND and raised six children. Mary and Ken were happily married for 61 years. Ken went home to be with Jesus on January 24th, 2014.  Mary had an active role on the farm, often driving truck or tractor when needed as well as maintaining vegetable and flower gardens and several apple orchards and sweet corn patches. Mary enjoyed hosting winter open houses with Ken for the Pioneer seed business which they worked in for over 20 years.

Mary was a member of Bethany Free Lutheran Church for almost seventy years and served in every role in the Women’s Missionary Federation. Mary also served as a Sunday School teacher, was involved in the local Homemaker’s Club, was a public health assistant, was a volunteer cook at countless Bible Camps at Faith Haven Bible Camp on Eagle Lake Minnesota, and for a number of years was the head of food service at the Mooreton Elementary School, part of the Wahpeton School District. Mary also enjoyed working for a number of years at Dean’s Landscaping in Wahpeton where she enjoyed working with people looking to find the right tree, bush, or plant for their home.   Mary was a gifted gardener, cook, musician and artist of many crafts and spent much of her time baking bread, pies, and Norwegian delicacies to share with family and the community. Late in her life, Mary would volunteer at local nursing homes and assisted living facilities playing music and presenting programs and engaging with residents through music.

What was most important to Mary was her faith in Jesus and her love for her family and others.  Mary lived a life of service to Jesus by serving others, something that she learned at a very young age from her parents, in particular her mother Dagne who she remained very close to for her entire life. Mary had an active faith which often touched people that she never met, either through a prayer ministry or by collecting or making clothes and essentials for children in South America, India, or places close to home.   Many of you reading this likely have indulged in Mary’s famous cinnamon bread, her “sinfully delicious brownies”, one of her many Norwegian baked goods or pies which she would often make up to fifty at a time. Mary had a way of connecting with people and her legacy includes many people whose lives were touched by Mary’s life.

To order memorial trees or send flowers to the family in memory of Mary Nash, please visit our flower store.