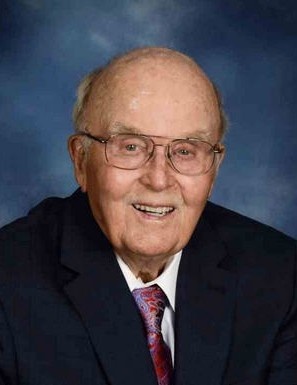 Maurice was born in Fargo, ND January 28, 1927 the son of Lewis and Hilda (Groff) Johnson.  He grew up on the family farm and was baptized and confirmed at Richland Lutheran Church, where he was a lifelong member.  Maurice graduated from Colfax High School and enlisted in the Navy.  He trained at Great Lakes Naval and served in Okinawa during World War II.  Upon his honorable discharge, Maurice returned to the family farm.  Within two weeks of his return his father passed away, which led to he and his brother Lester taking over farming responsibilities.  He also attended Hanson Mechanical Trade School in Fargo, which contributed to his machinery skills.

On March 2, 1957, he married Wilma Wold at Richland Lutheran Church.  In their 48 years of marriage they were active in the community and church, and enjoyed time spent with family and friends.  Maurice was a member of Richland Men’s Club (annual Lutefisk Supper), Sons of Norway, Swedish Cultural Club, VFW and American Legion and held many leadership roles over the years.  Maurice was most proud of his twenty four years on the board of Southeast Water Users, and their establishment of rural water in Richland County.

Blessed with a happy optimism, Maurice took great joy in meeting people and leaves a legacy of many friends. Maurice's Memorial Folder
To order memorial trees or send flowers to the family in memory of Maurice Johnson, please visit our flower store.