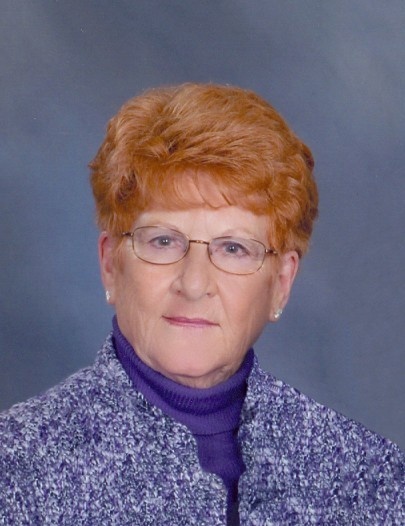 Muriel Johnson, 88, of West Fargo, ND, formerly of Mooreton, ND, passed away Monday, September 16, 2019 at her home under the care of Hospice of the Red River Valley.  Visitation will be on Friday, September 20, 2019 from Noon to 1:30 PM, followed by her Memorial Service at 1:30 PM, at Bethel Lutheran Church, Wahpeton, ND.  Rev. Gordon Lee will officiate the service.  Arrangements are entrusted to Vertin-Munson Funeral Home.

Muriel Lee “Huberty” Johnson, was born April 11, 1931 in Fergus Falls, MN, the daughter of Martha “Eckhardt” & Hilman Halstenson.  She grew up in Fergus Falls and Mooreton, ND, and graduated from Wahpeton High School.  Muriel was united in marriage to Gordon Marcus Jerome Johnson on September 29, 1951 in Dwight, ND.  The couple lived and farmed on the Johnson home farm until June of 1993 when they moved into Mooreton, and later moved to West Fargo, ND in September of 2016.

Muriel and Gordon raised 5 children. After her children grew up, Muriel went to work as a CNA at St. Catherine’s Living Center and later to St. Francis Healthcare.  She retired from St. Francis in 2009.

Muriel was a great cook and cooked Sunday meals for the family.  She took great pride in her flower beds and growing grapes to make wine with her family. She also enjoyed spending time at the lake with family and friends. Muriel's Memorial Folder
To order memorial trees or send flowers to the family in memory of Muriel Johnson, please visit our flower store.