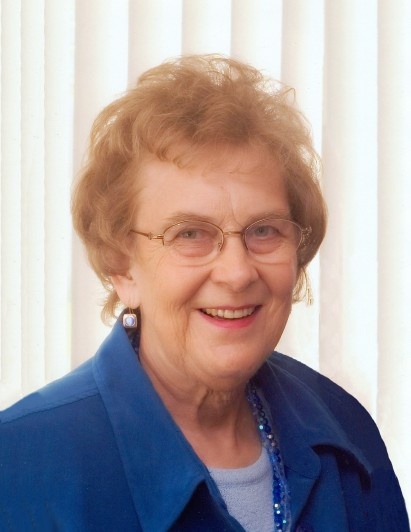 Patricia “Pat” Olson, 85, of Breckenridge, MN, passed away on Thursday, October 10, 2019 at CHI St. Francis Hospital in Breckenridge.  Visitation will be held on Wednesday, October 16, 2019 from 9:30 AM to 10:30 AM, followed by her funeral service at 10:30 AM at Vertin-Munson Funeral Home in Wahpeton, ND, with Rev. Dan Forsberg officiating.  Burial will be at Riverside Cemetery, Breckenridge.

Pat was born on February 2, 1934, in Minneapolis, MN and was adopted by Frank and Winifred  Aarestad in 1939. She graduated high school from West Central School of Agriculture in Morris, MN. Post-graduation, she worked as a teller at 1st National Bank in Breckenridge for a few years and became a homemaker after the births of her children.

Pat met the love of her life, Harlan Olson, when he bought her a hamburger at the bowling alley in Breckenridge.  They married on September 17, 1955 and celebrated 53 years of marriage prior to his death in 2008.

Pat loved music. She sang in many church choirs and also played in and was the director of the church bell choirs. She even persuaded Harlan to play in her bell choir which was quite an accomplishment considering he couldn’t read music! Pat loved to play piano while her grandchildren sang along.  She often accompanied her Uncle Rey Aarestad, when he would sing at various events.

If you were anywhere near Pat you were most likely playing Hucklebuck, Merry Widow, Rummy, or other various card games (but you were probably losing!).  She loved to laugh, and she loved to win. If you weren’t losing in a card game to Pat, you were probably out bowling, playing bingo, going to Star Lake, browsing auction & garage sales, or admiring her flower gardens with her favorites being African Violets and roses.  One of the highlights of her life was being featured on the Twin Town Villa newspaper ad and St. Francis Home billboards around town.

Becoming a grandmother and later great-grandmother brought her great joy.  In 2018, Pat was blessed with finding and meeting her biological brother and learning about her birth family.

She has touched the lives of so many people and her presence and sweet nature will truly be missed.