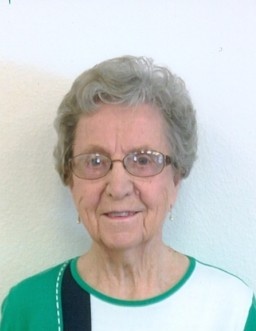 Pearl A. Lee, 93, of Fargo, ND, formerly Wahpeton, ND passed away on Wednesday, October 31, 2018 at Bethany Retirement Living in Fargo.  Visitation will be held on Monday, December 3, 2018 from 10:00 am to 11:00 am, followed by her memorial service at 11:00 am at Messiah Evangelical Lutheran Church in Fargo.  Burial will be at Fairview Memorial Gardens in Wahpeton.  Arrangements are entrusted to Vertin-Munson Funeral Home, Wahpeton.

Pearl Avaline Isackson was born June 4, 1925, in Wahpeton, ND, the daughter of Henning and Borghild (Bakken) Isackson.  She grew up in Galchutt, ND, attending Nansen Township School and later graduating from Wahpeton High School in 1942.  Pearl married Oscar Lee on October 19, 1946, in Galchutt.  They lived in several cities in MN and SD, before moving to Wahpeton in 1956. Pearl began working at J.C. Penney in 1965 and continued working there for 23 years.  In 1996, the couple moved to Fargo, ND.

Pearl enjoyed embroidery and journaling, along with reading after her retirement.  She was a former member of Bethel Lutheran Church and stayed active in Circle 1, quilters, and as a Sunday School Teacher. Pearl was also a life member of the VFW Auxiliary and a member of Messiah Evangelical Lutheran Church in Fargo.

She is preceded in death by her husband, Oscar, in 2001; her parents; sister, June Johnson; brother, Archie Isackson; and son-in-law, Douglas Jacques.

Memorials are preferred to Messiah Evangelical Lutheran Church-Hour of Worship or Hospice of the Red River Valley. Pearl's Memorial Folder
To order memorial trees or send flowers to the family in memory of Pearl Lee, please visit our flower store.